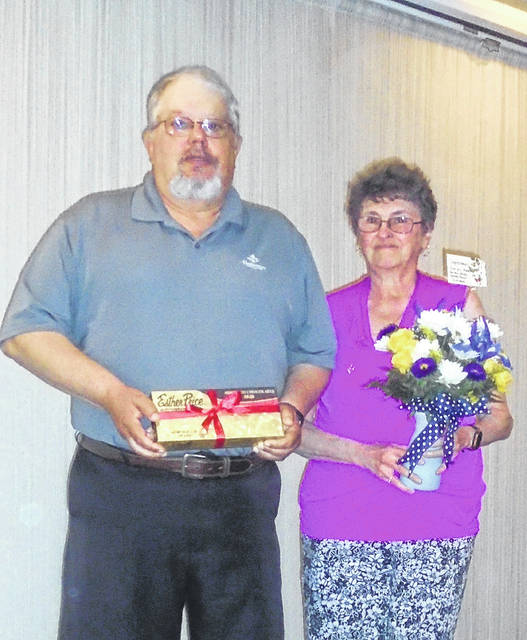 Three-hundred-fifty people were registered for the annual event.

The surprise announcement, made by Michael R. Besecker, superintendent of Darke County Board Development Disabilities, is a new community and training center is being planned for the county at the Wayne Industries building on Jaysville-St. John’s Road.

“There have been a lot of changes in the developmentally disabilities field and changes in federal and national laws and rules,” Besecker told the crowd of senior citizens. “Wayne Industries will be available next month, and it will be renovated to house the training and community center, which will be for senior citizens and the disabled. A grant will help fund the renovation.”

More on the project will be featured in an article in the newspaper later this week.

Another highlight of Senior Day was the announcement of this year’s Outstanding Senior Citizens of the Year, a title that went to husband and wife, John and Sue Strawser.

“When I think about volunteering, I think about dedication, commitment and compassion,” said the person who nominated them, but wished to remain anonymous. “I think about individuals whose heart is our community, who goes above and beyond to empower others.”

The Strawsers, it was noted, started volunteering for the State of the Heart Care in September 2015, and little did the staff, patients and families of that organization know the impact the couple would have on them.

The Strawsers are volunteers for State of the Heart’s We Honor Vets program offered to those in any branch of the military. They were instrumental in starting that program.

According to We Honor Vets, many community hospice providers have implemented an innovative model for serving veterans at the end of life — the Veteran-to-Veteran Volunteer Program, which aims to pair veteran volunteers with hospice patients who have been identified as veterans. Once paired with hospice patients who have military experience veteran volunteers have the ability to relate and connect with each patient, thereby creating an environment where life review and healing may occur.

John, a U.S. Navy veteran, has had a huge impact on the success of this program, it was stated.

“Sue, although not a veteran, attends every ceremonial pinning with John,” the nomination letter stated. “Sue’s compassion for We Honor Vets is evident in her commitment to serving this special population.”

Not only do the couple recognize patients with State of the Heart Care, they have been to various nursing facilities performing We Honor Vets ceremonial pinnings. They have recruited other veteran volunteers to help with this program.

“We will never forget John’s impact that he left on one patient and his family,” the letter stated. “The patient was completely bed-bound and unable to stand on his own. John, with Sue by his side, presented the veteran with a plaque and a pinning as State of the Heart staff and family of the individual stood the patient up so that John and the patient could salute each other. With John and Sue’s compassion for veterans, we would never be able to do what we do. John’s military experience and background help him connect with the patient, and both John and Sue are able to connect to patients in a healing way.”

It went on, “Sue, whose heart is bigger than anyone we know, goes above and beyond for any patient needs. She is known for sitting with patients when families are unavailable. Her kind heart never goes unnoticed.

The Strawsers also deliver mail that needs distributed to other (State of the Heart) offices in Coldwater and Portland, Ind….no matter what time of day and even at night. They have always been available with any needs that patients may have.”

It was reported that the couple also are involved in volunteering for The Walk to Emmaus in Darke County, where they have served on the board and also as chair. They have served as 4-H advisers for more than 13 years, worked in local hospital cafeterias serving patients as well as serving as Sunday school teachers at their church. They are also involved in baking cookies for the Kairos prison ministries.”

Additional highlights of the Senior Day event were a trivia contest, prayer by Chaplain Doug Klinsing, Gene Sherfy with music, door prizes and the lunch.