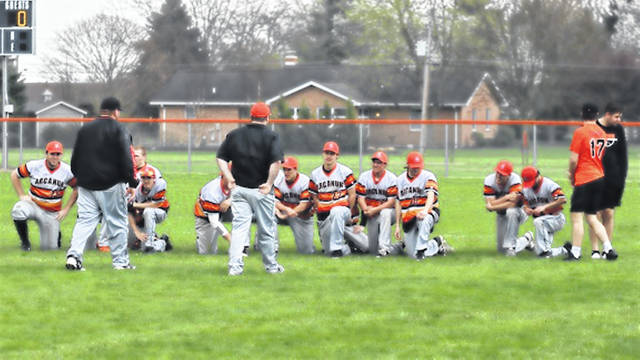 VERSAILLES – The Arcanum Trojans made the most of four hits and seven walks to defeat the Versailles Tigers in a Saturday non-conference baseball game to go 4-0 on the week.

Arcanum plated a run in the top of the second and added four runs in the fourth to take a 5-0 lead with the big hit a two run bases loaded single off the bat of Evan Atchley.

“Evan Atchley had a key hit with the bases loaded with the infield drawn in,” Baker said. “We utilized all four hits to score our 6 runs.”

Versailles got on the board in the bottom of the fourth to trail 5-1 with four innings in the book.

The Tigers added two runs in the bottom of the fifth with the teams playing scoreless in the sixth and Arcanum plating a run in the top of the seventh to close out scoring on the day and give Arcanum the win.

Austin Smith picked up the win for Arcanum tossing 4.0 innings while allowing three runs, three hits, two walks and striking out two. Wade Meeks threw three scoreless innings in relief giving up three hits, one walk and one strikeout to earn the save.

“Austin Smith pitched four strong innings,” stated Baker. “He ran into a little trouble in the fifth allowing the first two runners to reach base. Wade Meeks came in and pitched out of the jam and finished the game.”

Arcanum played error free ball while the Tigers had two errors on the day.

“Mitchell Wogomon came off the bench and made a couple key plays at 3rd for us,” Baker noted.