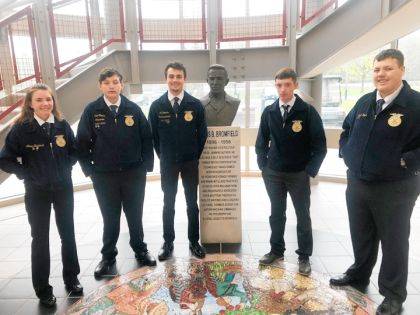 BRADFORD – Recently, a group of Bradford FFA students were far from their own little home town. A couple hours away in Columbus, the Ohio FFA State Convention was being held at the State Fairgrounds and agriculture loving kids were largely prominent in the city. Bradford’s students spent May 2 and 3 learning and exploring the wonders of what agriculture truly had become.

They learned leadership and empowering statements that could be brought back to their very own chapter. One keynote speaker inspired them greatly according to the ones that attended. Chris Koch, a quadruple amputee, spoke on his struggles and how he overcame those. He’s a farmer, drives a tractor, and can even ride a skateboard. That may seem impossible to some, but Koch doesn’t let anything hold him back. This attitude bled over into the students and made them believe that anything is possible.

Bradford wasn’t only there just to visit though. Their chapter was awarded the Charitable Giving Award for donating at least $500 over the past year. This was accomplished through donating to FFA Camp and to the Bradford Resource Center. Alexis Barhorst also received an award for getting a gold rating on her treasurer’s book.

Another significant moment at convention was the expo. Booths were lined near and far. Students could become educated on the agriculture industry, military, and have the opportunity to get in touch with many different colleges. Bradford students also had opportunities to explore the city as well. Tourist attractions and entertainment littered the large city, allowing for fun everywhere. Bradford spent some time at Magic Mountain, a large entertainment center, where laughs were had and bonds were strengthened.