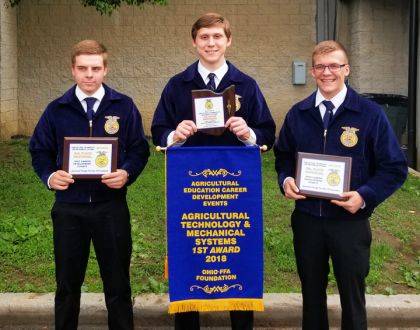 ARCANUM – On May 2 and 3, members of the Arcanum – MVCTC FFA Chapter attended the 91st Ohio FFA State Convention held at the Ohio Expo Center in Columbus. Members were recognized for various accomplishments at their third State Convention after being reestablished as an FFA Chapter. While in Columbus members were able to attend the Ohio FFA Career Expo and attend Convention Sessions that included motivational speakers Chris Koch, National FFA Secretary Layni LeBlanc and State President Kolesen McCoy.

During the convention’s first session, Sidney McAllister walked across the stage to receive recognition for the chapter’s Charitable Contribution to the Dayton Children’s Hospital with money raised through the Arcanum Lions Club Walk for Pediatric Cancer. During the fourth session three of the Chapter Officers were recognized for their Gold Rated Officer Books. They were Gracie Garno – Treasurer, Kaylee Wilcox– Secretary, and Raymond Denniston – Reporter. Also during the fourth session, the Agricultural Technology and Mechanical Systems Team were recognized on stage as state winners in their CDE. Cael Gostomsky was also recognized for being the top individual in the ATMS Contest. Other members of the ATMS State Winning Team were Ethan Garbig, Levi Walker and Alex Weiss. While at the convention the Arcanum MVCTC FFA members were able to pick up their banner for placing third in the State in Grain Merchandising. Members of the Grain Merchandising Team were Zach Smith, Isaac Smith, Blayne Hess and Luke Brinksneader.

To cap off the convention trip, during the fifth and final session four members of the chapter were awarded the State FFA Degree. The State FFA Degree is earned by less than two percent of Ohio FFA Members and is the highest honor the Ohio FFA Association can bestow on a member. The Arcanum students who were presented the degree were: Austin Fourman, Levi Walker, Sidney McAllister, and Brenna Loxley. 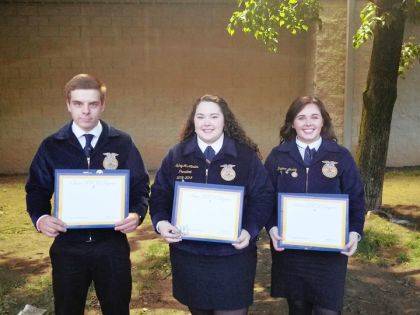