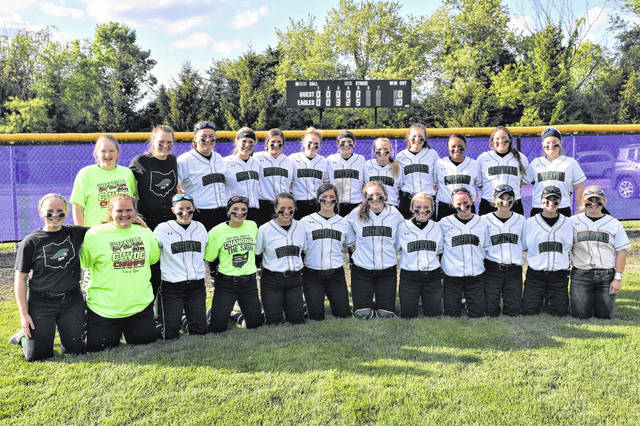 “Down to 32 teams in DII and it’s awesome to see the bracket shrinking and three more steps to get to final four in Akron,” said Newland. “Sixteen straight 25 win season is quite amazing when you only get to schedule 27 games.”

“Pressure is a privilege and there is pleanty to go around when it comes to this program. Just play for your team and not yourself.”

“There’s a tradition that previous players have worked extremely hard to build and now it’s our responsibility to keep the tradition alive and growing,” Newland added. “Being a part of LWSB holds you to higher standards of expectations and it’s personally something I will never change. Just awesome to ba a part of.”

The Lady Wave run ruled the Franklin Lady Wildcats 10-0 in five innings to advance to the District Championship game to play the Cleves Taylor Lady Yellow Jackets, 10-0 winners over Goshen.

“Great team win today,” said Newland. “Another step closer to finals and another step up the ladder. Move to district finals looking for 12 of last 13 golds. Solid, solid day through the order and some great plays. Great crowd and atmosphere.”

The teams played scoreless ball through 2.5 innings before the Lady Wave used a Morgan Gilbert third inning opening walk, catcher’s interference putting Lani Shilt on first with the runners advancing to second and third on a ground out to third off the bat of Susi Blocher.

Natea Davidson used a sacrifice bunt gave the Lady Wave a 1-0 lead scoring Gilbert from third with Shilt moving to third on the play followed by a walk to Kennedy Fashner. Courtney Bryson came in to courtesy run for Fashner and quickly stole second base putting runners and second and third setting up a two run Haleigh-Mayo Behnken single to left giving Greenville a 3-0 lead after three innings of play.

The Lady Wave plated two runs in the bottom of the fourth to lead 5-0 with Chloe Sowry reaching first by way of a hit batsman, the Lady Yellow Jackets misplaying a Grace Shaffer bunt putting courtesy runner, Saige Fellers on third and Brianna Fellers courtesy running for Shaffer.

Gilbert’s line drive went for an error scoring S. Feller with B. Fellers advancing to second and Gilbert standing safely on first. Davidson drilled a two out RBI single to left scoring B Fellers upping the Lady Wave’s score to 5-0 with five innings in the book.

The Lady Yellow Jackets came to the plate in the top of the fifth limited to one hit on the day but quickly got back-to-back singles putting runners on first and second with no outs. A sacrifice bunt advanced runners to second and third with one down setting up back-to-back swinging strikeouts with Shaffer on the mound keeping Jackets scoreless.

The Greenville girls put the game away in the bottom of the fifth with Mayo-Behnken leading off with a double to center, stealing third and scoring on a Nyesha Wright groundout.

Gilbert plated the ninth run of the game with Shilt beating out a RBI infield single. Davidson lined a two out walk off single to left scoring Shilt with the winning run to give the Lady Wave a 10-0 run rule Sectional Championship.

“Lani Shilt, the senior has picked people up, patted them on the back and got on them,” Coach Newland stated. “And this week she is on a mission for her fourth gold medal.”

The Lady Wave play for their 12th District Championship in the past 13 years, Saturday, May 18 with an 11 a.m. start time at Lakota East High School.