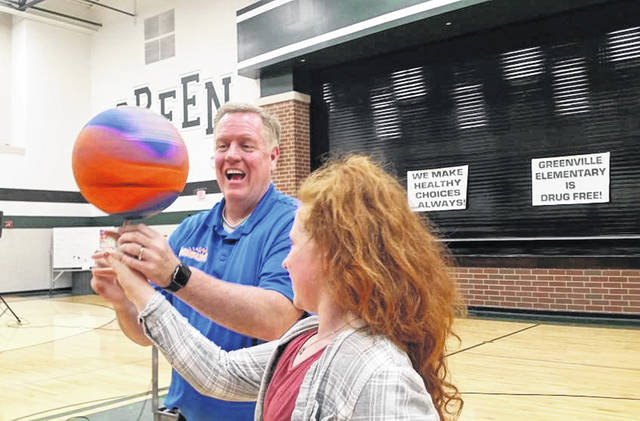 GREENVILLE – Greenville Elementary students spent the past few days taking part in a variety of activities in observation of Red Ribbon Week.

On Thursday, students enjoyed an assembly with Jim “Basketball” Jones, a motivational speaker from Avon Lake, Ohio, who for the past 23 years has shared positive messages with students of all ages, as well as teacher training workshops.

His message has pretty much stayed consistent for the nearly quarter century, Jones said – character education, bullying and being drug-free.

“I grew up a special education student,” Jones shared. “I want kids to know they are important and they can learn.”

Thursday’s message was loud and clear for Greenville’s youngest students:

“I may not be able to change the world, but today, I can change somebody’s world.”

While performing several moves using basketballs in a variety of sizes, Jones led students in a series of phrases he asked them to repeat with hand and body motions.

Phrases included “teach us,” and “patient listening.” along with learning about making “better choices,” which lead to “better outcomes.”

Jones led the third and fourth-graders during the afternoon’s first assembly with “I have a choice. I can be a victim or victorious, not both.”

Several students were chosen by Jones and their teachers to join him on the gym floor to participate in a variety of activities demonstrating making correct decisions.

“People who feel good about themselves make better decisions,” Jones told the students, encouraging them to clap and cheer as their peers were selected to participate in the assembly. “You guys have a power. You have the power to help someone else.”

As students were filing in to the gym for the assembly, fourth-grader Addi Parin was chosen by Jones to twirl a basketball on her finger.

“I thought it was pretty cool,” she said afterward. “I learned to make the world a better place. To make somebody’s day happier.”

Jones, who’s appearance at the Greenville Elementary was paid for by the Coalition for a Healthy Darke County, also left a drug-free message:

“You’re important. You matter. We Care. Don’t make bad choices. Be drug free,” he told students, again asking them to repeat each phrase.

Nationally, Red Ribbon Week is observed in October, but due to testing schedules, Greenville’s staff decided to move it to May.

Also this week, students participated in several other Red Ribbon Week events, including “Wake Up Drug Free” on Monday when they were permitted to wear their pajamas; Scavenger Hunts; and “Outshine Drugs,” day by wearing their brightest colors; “Living Drug Free is No Sweat” wearing work out clothing; “Team Up Against Drugs” by wearing their favorite team shirt/jersey;

and “Red-Out,” day, wearing red for being drug free.

Today, the school’s nearly 900 students will be treated to free ice cream from Dairy King in Greenville, which will be served by students who are members of the We Are the Majority organization, which promotes living a drug-free and positive lifestyle.