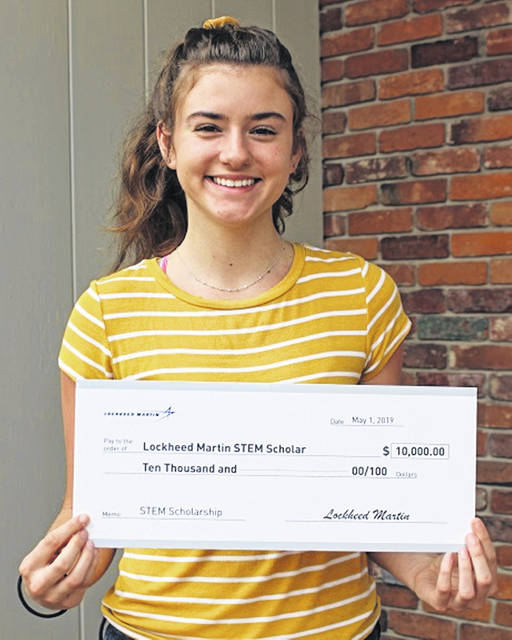 “I found out when I got the email and I kind of didn’t believe it at first,” Coakley said of first knowing about her selection. “I was like; what – no – that’s way too out there for me. I told my mom, ‘I don’t want to tell anyone about it until I get something in the mail,’ and then I got it in the mail and I couldn’t believe it.”

Coakly is one of 200 outstanding students who will receive $10,000 annually to attend an accredited, four-rear college or university in the United States to study math, physics, engineering, computer science, or information systems.

The Lockheed Martin Scholarship program is a highly competitive, with more than 6,300 applicants from across the country,

In a letter informing Coakly of receiving the prestigious scholarship, Lockheed stated: “We chose you because of your academic record, strong leadership, and extracurricular service and achievements. In addition, we were impressed with your personal goals and aspirations.”

“Our company is proud to provide opportunities to innovative students, like you, who want to develop their talents and build a better world. We know that science, technology, engineering, and math (STEM) are critical to the future of our economy and to the future of progress. By pursuing a career in STEM, you will help expand hope and opportunity across our society.”

The 2018 Greenville alum gives much credit to Greenville City Schools’ academic programs as well as competing for GHS athletics.”

Caokley signed her letter of intent in April of 2018 to run cross country for Notre Dame College in Indiana. Soon after committing to Notre Dame, the school unexpectedly canceled the program. Coakley quickly signed with Malone University in in Canton, Ohio to continue her education along with running cross country.

“I think it was a really good thing to happen to me,” Coakley stated. “It was crazy because at the time it felt like it was the end of the world – it was just awful but now I couldn’t imagine going anywhere else except for Malone.”

“I just think it was meant to be,” continued Coakley. “When I got this scholarship it was such a big blessing because college is really expensive and I was worried how I was going to keep paying for it. I knew I wanted to keep going there so when I got this I felt like God was supporting me – like God wanted me to be there.”

The scholarship did not come easy as Coakley spent much time applying for the honor.

“It is for anyone that is going into a STEM field, so since I am a math major I had to turn in (information) for high school, my first semester of college, other curricular and extracurricular service.”

Coakley took time to thank her parents, Stephanie and Scott Lind, her grandparents Rainee and Susan Reigle and all those at GHS who had a hand in supporting and helping her.

“Going to Greenville High School, participating in cross country and having my friends and coaches supporting me including my mother (Stephanie) who coached me, I think that played a huge part in me going to college and the academics played a big part in me deciding to go to college.”