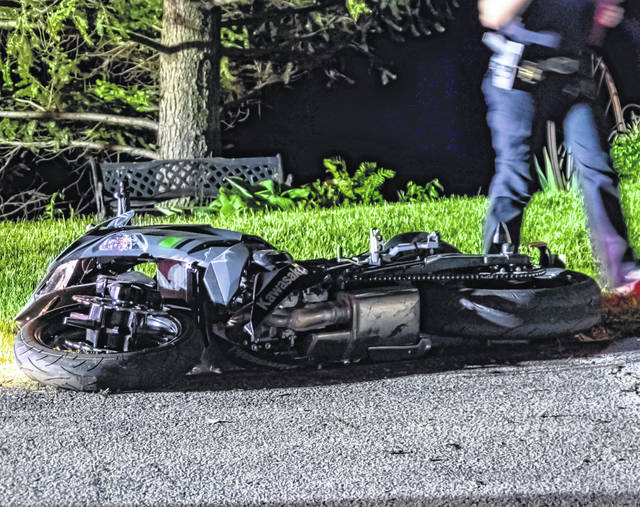 WAYNE LAKES — An Englewood man was transported by CareFlight to Miami Valley Hospital Friday night after a Darke County Sheriff’s Deputy on patrol in the village of Wayne Lakes discovered him lying unconscious as the result of a motorcycle accident.

At approximately 9:08 p.m., emergency personnel from New Madison Fire Department and Tri-village Rescue as well as Deputies from the Darke County Sheriff’s Department and CareFlight were dispatched to the area of West and Highland Drives in Wayne lakes in regards to a motorcycle accident with injuries.

According to the Darke County Sheriff’s Department, a preliminary investigation into the accident has revealed that a 2018 Kawasaki Ninja, driven by 23-year-old Cameron Walker, of Englewood was traveling northbound on West Drive at the intersection of Highland Drive when he failed to negotiate a curve, going off the right side of the roadway.

Walker then struck a guide wire of a utility pole resulting in him being ejected from his motorcycle before coming to rest in a driveway in the 3600 block of West Drive.

Walker was treated on the scene by Tri-Village Rescue before being transported to a landing zone established at the Fort Jefferson cemetery to be transported by CareFlight to Miami Valley Hospital for his injuries. According to those on the scene, Walker was not wearing a helmet at the time of the accident.