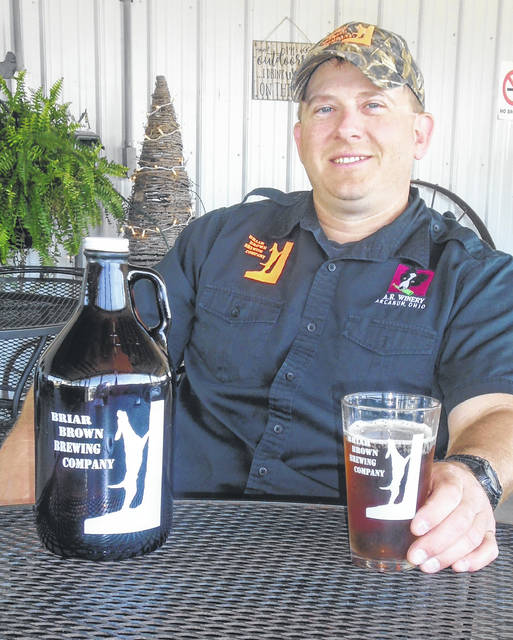 ARCANUM —Russel Rex, owner of Briar Brown Brewing Company and A.R. Winery at 3564 Grubbs-Rex Road, Arcanum, is introducing yet another beer he has created, calling it Darke County Pilz.

“We just came out with it and have had a great response from the community so far,” said Rex. “It’s made out here with all Darke County grains. Everyone really likes the idea of a Darke County-grown brewed beer. It’s a Pilz with an added layer of depth. It’s crisp, refreshing, medium-bodied that’s a crowd-pleaser. We’re proud to name it this because the barley is locally grown.”

He and wife, the former Angie Flory, started A.R. Winery several years ago after she expressed that she would like to start one. Briar Brown Brewing then became licensed in 2018, and they sold their first beer on Dec. 27 that year. The Darke County Pilz is the company’s fifth beer.

“Everything is craft beer,” he said. “A friend, Mike Miller of Richmond, Ind., taught me how to make it. I use a 15-barrel brewhouse and we come up with a recipe. I make five gallons and check for taste and then I use a 30 gallons and break it down into five gallons, so we have five attempts at hitting the taste we like.”

The recent beer is a cross between pilsner and lager, so that’s why the Rexes decide to call it Pilz. Their neighbor offered the grain to assist in producing their most recent beer.

The sixth beer, which will be coming out in June, will be made of blood orange wheat.

“Every time you think they can’t take beer to the next level, somebody does,” said Rex, who noted they have wine and beer in 80 stores now. “I’m all about being different.”

He said he prefers making beer over wine.

“It’s a longer process…probably eight hours and 10 barrels, or 310 gallons, a run,” he said. “A couple of the beers you can do in three or four days, but that’s a rarity. You can make beer, from start to finish, in a week or a week and a half. Wine takes two months to a year.”

“We use some grapes but we prefer to use a variety of fruit,” he said. “We used to grow strawberries but now we buy them. We get blackberries, pumpkin from Downing’s Fruit Farm and we purchase peppermint.”

Since the Rexes started the winery, their business has grown immensely. They have expanded the winery another 30×50 feet, added a 20×30-foot brewer and yet another 20×60-foot building.

“We will be putting up five more buildings before we stop,” he said. “We will be expanding our tasting room and brewery manufacturing. Then, we will put in a walk-in refrigerator and another area for keg storage. Also in the plans are a lean-to to store wood for the brick oven and a 50×120-foot event center.”

Rex said his Flyball racing organization also will be moving to the rural Arcanum location from Greenville.

”We will have our dock-diving for dogs in the event center,” he said.

The event center also will be available for rental by organizations and individuals.

“We just expanded our parking lot two weeks ago t0 50×100 feet, with yet another parking lot to be added,” he said. “Once it’s all done, we will have 500 tons of gravel there. There is never enough parking here.”

The business, which offers indoor or outdoor dining, now have restrooms inside.

They also recently added a courtyard for more seating with live bands on the new outdoor stage throughout the summer. He invites people to bring along their lawn chairs to enjoy the entertainment of the musicians and their acoustic instruments.

One entertainer, Titus Bowman, has performed a song he and Rex co-wrote at one of these appearances. It’s entitled “One Step Short of a Two-Step.”

“Our neighbor at T&C Sports donated the fence for the courtyard,” said Rex, a 1994 graduate of Arcanum High School.

He said when the winery became a reality, he expected to succeed but not as fast as it did.

And, now, they have tripled their business with beer.

Another feature at the business is the sale of their 12-inch, Chicago-style pizzas. The wood-fired brick oven pizzas on the outdoor porch are now available Wednesday-through Friday starting at 4 p.m. and all day on Saturdays.

“We make one at a time every three minutes, Rex said.”

Wednesday nights through the summer, they’re offering “Brats and Beer” and “Wieners and Wine” on the grill from 4 to 8 p.m. Plus they sell Briar Brown growler refills for $10 on Wednesdays.

Assisting the Rexes are one full-time employee, Ashley Schultz, and three part-time workers.

And, they’re open all year-round as the patio is heated.