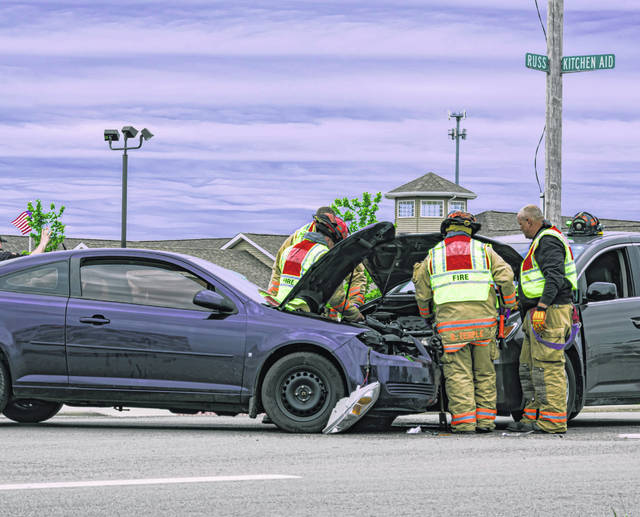 GREENVILLE — A driver was injured Tuesday afternoon as a result of a near head-on crash between two-vehicles.

At approximately 2:15 p.m., emergency personnel from Greenville City Fire Department and Greenville Township Rescue along with officers from the Greenville Police Department were dispatched to the area of East Russ Road and Kitchen Aid Way in regards to a head-on accident with injuries.

According to the Greenville Police Department, a preliminary investigation into the accident has revealed that a blue Chevrolet Cobalt was travelling southbound on Kitchen Aid Way when the driver of the vehicle attempted to make a left-hand turn onto East Russ Road, pulling into the pathway of oncoming traffic resulting in a nearly head-on collision with a grey Honda Odyssey travelling westbound on East Russ Road.

The male driver of the Chevrolet Cobalt, as well as his female front seat passenger and a juvenile back seat passenger, were examined on the scene by EMS and found to be uninjured in the accident. A female driver of the Honda Odyssey was treated on the scene by Greenville Township Rescue before being transported to Wayne HealthCare for what was described as minor injuries.

Officers on the scene stated that it is believed that the Chevrolet Cobalt was attempting to drive around a semi-tractor and trailer in the process of making a right hand-hand turn on to East Russ Road when the driver failed to see the approaching Honda Odyssey.