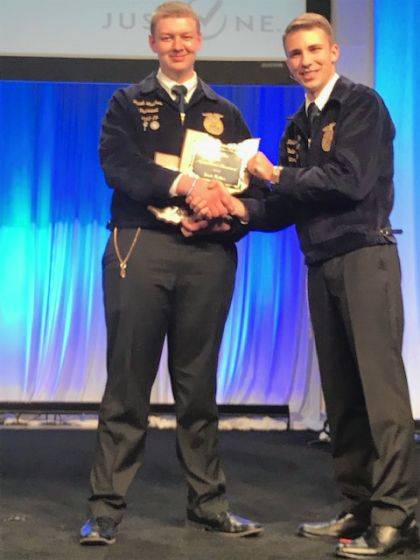 VERSAILLES – The Versailles FFA Chapter traveled to Columbus on May 2 and 3 to participate in the 91st annual State FFA Convention. The theme of the 2019 convention was “Just One.” The convention is a way to recognize the accomplishments of FFA members and chapters throughout the state. Versailles was recognized in many areas including: Top Ten Chapter, State Degrees, State CDE’s, and Proficiency Winners. Highlights of the State FFA Convention included Jacob Wuebker being named the State Star in Agriculture Placement and having two proficiency winners from Cole Luthman and Jacob Wuebker.

Jacob Wuebker, son of Jeff and Dena Wuebker, was named the Star State in Agriculture Placement at the 2019 State FFA Convention. Wuebker was given this top honor after completing a 25-plus page application and receiving an interview at his SAE site on Wuebker’s Farms in which he was interview for one hour on his SAE and roles and responsibilities. He joins several other Versailles FFA members that have earned this honor of State Star in Agriculture Placement including Ted Schmitmeyer, Jay Heitkamp and Ryan Rethman. He advanced to the Big E in September to compete on the national level.

On Thursday morning, two Proficiency finalists attended interviews, and six members of the Versailles FFA Chapter presented three, 15-minute PowerPoint Presentations that highlighted the three categories of the National FFA Chapter Application which include: Growing Leaders, Building Communities, and Strengthening Ag. Caden Buschur and Dallas Hess presented in the Growing Leaders portion, Courtney Batten and Ian Gehret presented in the Strengthening AG portion, and Marcus Berger and Deanna Hesson presented in the Building Communities portion. As a result of the presentations and interviews Versailles FFA was named among the top ten chapters in each division. Versailles was named a top ten chapter overall and named as an Ohio FFA Gold Medal Chapter.

The Versailles FFA had eight members from the chapter receive this award, and they were recognized on Friday night at the convention. The members who received this degree were: Kimberly Winner, Caitlyn Luthman, Troy May, Austin Timmerman, Ian Gehret, Deanna Hesson, Caden Buschur, and Jon Gehret.

Versailles FFA had 38 members who attended the State Convention. 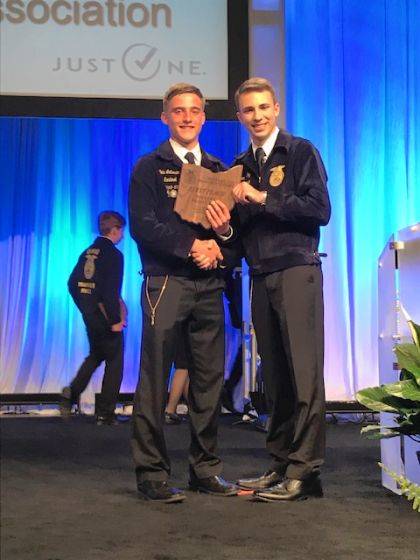 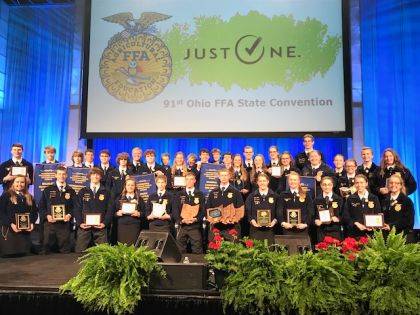