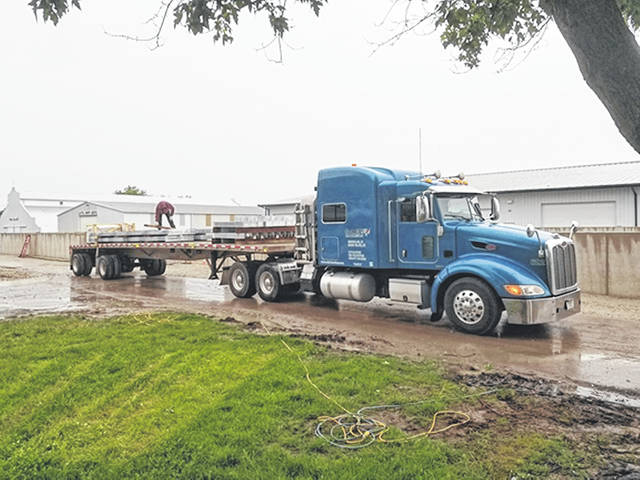 GREENVILLE — Construction has well begun on the new swine barn at the fairgrounds, from footers poured almost two weeks ago to an early morning steel delivery on Thursday.

“This is a big day, with them unloading steel,” said Brian Rismiller, Darke County Fair Manager. “They’ll probably spend most of the day unloading.”

H.A. Dorsten is the general contractor for the 28,000 square-foot project; their contract was approved by the fair board earlier this month.

After a fire brought the original swine facility to the ground on Oct. 25, 2018, an opportunity presented itself in not only one new building but three new functional buildings.

To date, the campaign has passed $2.1 million with a recent gift of $75,000 to be spread over five years from Hill’s Pet Nutrition.

According to a recent press release from Matt Hughes of Cincinnati-based nonprofit consulting firm Fair Funding LLC, the Great Darke County Fair campaign has received gifts from $50 to as much as $500,000.

Hughes shared the success of a fundraising kickoff dinner by the Friends of the Senior Fair Board. The event was held in the Youth Building at the fairgrounds with locally-prepared food and guest speakers back in April.

“The momentum really picked up after that event,” said Hughes of the fundraising campaign with $500,000 from Cargill for the new swine facility, $50,000 for a show arena in the swine barn by Second National Bank, and $25,000 from the Brown Family Foundation towards the show arena at the dog facility.

Many other groups, companies, and private citizens have donated towards the campaign.

All gifts for the campaign matter whether financial donations, sponsoring pens at the swine and goat barn, or even grain, corn, and beans. All are welcome and tax-friendly.