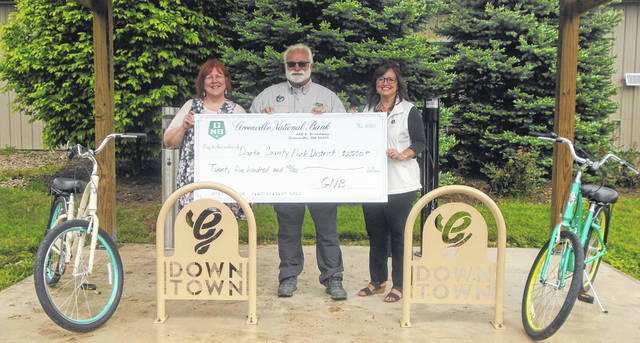 GREENVILLE — Greenville National Bank (GNB) has once again awarded another $2,500 toward the Bike Trail project.

To date, the financial institution has donated $15,000.

While at the Bish center, Martin had the opportunity to see the newly installed, filtered water fountain made by the Murdock Co. and a Fix-It Space at the bike hub on the south side of the center for bikers to use while passing through. The two items were installed this week by park volunteers Jim Poeppelman and Ivan Brand.

“I’m blown away,” Martin said. “These are the kinds of projects that touch the entire community, so we love to give to all ages…and it’s lasting.”

“Greenville National and the Harry Stephens Estate have been most generous,” VanFrank said. “We can’t do it without these kinds of donations. Greenville National has donated additional in-kind costs we incurred on the bike trail.”

The area where the bike station was created by the Hometown Pride group of Lowe’s, and now features concrete flooring donated by PepCon, while Main Street Greenville gave the bike racks to the center.

“We are going to rent bicycles,” VanFrank said. “Country Side gave us bicycles at discount.”

According to VanFrank, the bike trail had its beginnings in 2005, when the first meeting was held at Shawnee Prairie Preserve with representatives of organizations from Indiana and Ohio attending.

Property, two or three miles long, was received from Vectren Pipeline, DP&L and Panhandle, which began near Gettysburg.

“We then decided to go ahead and do it, and it was called the First Mile Project,” VanFrank said.

Another 8.2 miles was added in this phase, and that extends from the underpass at U.S. 127 and comes out at Katzenbarger Road. The path will then run along Sebring-Warner Road, make the corner at the EUM Church and continue on to Ohio Street.

“The city will put lanes on each side of Ohio Street next year,” Shiverdecker said. “And the trail will connect to the bike path behind the Bish Discovery Center and this phase will end at North Broadway to Garst Museum on Wilson Street, passing behind the Maid-Rite and Hamilton’s.

After that, VanFrank said the trail will continue through the city park.

“It all amounts to about 11 miles of trail and 14 miles of the trail and sharing the road,” the parks director said.

The discovery center, he said, will be the bike hub.

Who is Alice Bish, for whom the park and discovery center are named?

“Alice Bish was the wife of Chalmer Bish, who donated five acres for the lot on East Fourth Street, which is now known as Alice Bish Park,” VanFrank said.

Darke County Parks bought the property on South Ohio Street in late 2017,and opened the doors to the discovery center on July 21, 2018.

“We received a $374,000 grant from the Ohio Public Works Commission to purchase this five acres of property as part of Greenfield Reclamation,” VanFrank said.