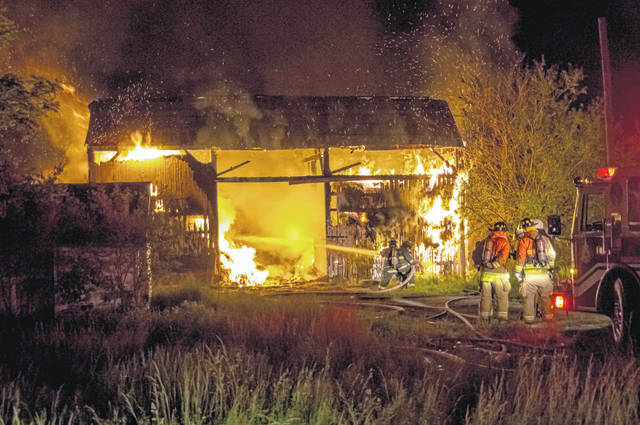 ROSSBURG — Fire crews from across northern Darke County battled a two-alarm barn fire late Sunday night. At approximately 11:05 p.m., emergency personnel from Rossburg Fire Department, Ansonia Fire and Rescue along with numerous mutual aid companies as well as deputies from the Darke County Sheriff’s Department were dispatched to the area of Medford and Elijah York Roads in regards to a fully involved barn fire.

According to Rossburg Fire Department’s Assistant Fire Chief, Rob Widener, a deputy from the Darke County Sheriff’s Department noticed a large fire from a distance and upon further investigation discovered the barn near an abandoned house located at 5555 Medford Road to be fully involved with heavy smoke and flames showing.

Assistant Chief Widener noted the barn was being used by its owner to store large amounts of hay and straw in which was packed tightly in the structure making it difficult to extinguish the fire. As a result, heavy equipment had to be called to the scene to assist in the removal of the hay and straw from the structure before it could be fully extinguished.

“Nobody has been here, or supposed to have been here, for several days now,” commented Nor Barga, owner of the property. “The house here is empty and there is no electricity or any other utilities ran to the barn or the house. We use the barn to store the hay and straw from this farm for our dairy farm.”