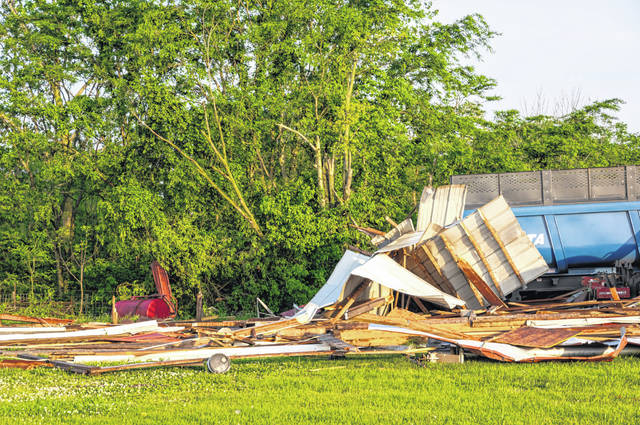 HOLLANSBURG — A rural family on the outskirts of Hollansburg are crediting faith and the actions of volunteer firefighters for helping them get through the trying events of Memorial Day’s severe storm system.

As of Wednesday afternoon, the National Weather Service had declared ta system that passed through and caused numerous reports of massive damage in southeastern Darke County was an EF1 tornado.

One report of damage was a large barn, located just feet from a Hollansburg farmhouse. The barn was lifted off of its foundation and resulted in debris scattered throughout a field across the roadway.

“I am not saying those who believe in the Lord don’t get hit by these storms or don’t get hurt because we all suffer through these times together. But I do thank the Lord for protecting us and seeing us safely through the night,” said Rose Hays, who along with her husband and mother-in-law live in a farmhouse on Hollansburg-Richmond Road that was struck by what she describes as a possible tornado.

“We were sitting in the front of the house, after the first round of wind and rain, trying to figure out what we should do next. Everything had calmed down and looked kind of nice. We thought, well…I guess it was nothing and everything was going to be okay. But the alarm on our cell phone went off a second time and by that time it was too late — it had already hit us,” recounted Hays. “I ran to my mother-in-law’s room where all I could do was cover her up to protect her then I opened up a closet door and stepped in. There wasn’t any time to do anything else. Two or three seconds later the wind blew through the windows. All I could think was it was a tornado. I heard it go through. It sounded like a train or something. The whole house seemed like it was moving it was shaking so bad. The wind was just a loud roar, it was all I could hear. Then there was this loud boom, the loudest boom I had ever heard,” she said.

The boom was the sound of the large barn being torn from the foundation and having its debris scattered about.

“We were in a room at the corner of the house just 40 or 50 feet away from the barn. I can’t believe nothing came flying through the windows and hurt us, or worse, maybe killed us.”

“We didn’t even know what had happened yet. All I could think about was how we needed to get to the basement. I told my mother-in-law we needed to go now. I knew they said there was going to be more coming through,” Hays said. “I was kind of a chicken not wanting to come out of the basement for a while once we were down there. We stayed until the rescue people got here and we knew it was safe.”

The rescue people she is referring to were volunteer firefighters from the Hollansburg Fire Department responding to the call of a barn damaged in the storm. Hays said the firefighters not only cleared the debris from the roadway, but took extra time and made sure she and her family were safe.

“I couldn’t imagine these people coming out in the middle of a tornado and risking their own lives to help us,” Hays stated. “They have no idea how much it means to us. They don’t get enough credit for what they do. Just the assurance they were here made me feel safer.”

Hays said she and her husband spent some time after the storms passed through outside going over the events of the night. “It was after midnight and it was so calm and peaceful. There was no wind blowing, no leaves moving. You would have never guessed what had just taken place. The weather, asides from being a little stuffy was perfect. I think that’s when it settled in and I started to realize what had really happened.”

The National Weather Service was expected to be in the area over the next couple of days to conduct a damage survey and conclude damages from the storm is that from a tornado. Earlier Wednesday, the National Weather Service confirmed at least five tornados hit the Miami Valley and were associated with the same storm system that passed through Darke County. The results of the damage survey will be released as they become available.