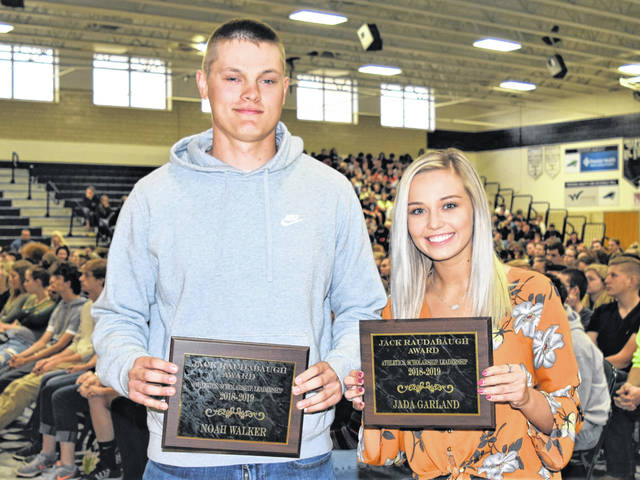 “The Raudabaugh Award in some ways is kind of like the Heisman for Greenville,” said Greenville Athletic Director Aaron Shaffer. “There are some tremendous young people, athletes and students that receive that award. “It’s more than just athletics. You have to be in good standing as a student.”

“The two young people this year; Jada and Noah, they are well deserved,” Shaffer added. “Those kids are active in many groups, they’re tremendous students and they demonstrated that they are tremendous athletes.”

The award was established in recognition of Jack Raudabaugh, a successful teacher, coach and principal in the Greenville Schools from 1937-1973. Raudabaugh served in World War II from 1943 to 1945.

Mr. Raudabaugh set forth the criteria as an inspiration to boys and girls entering Greenville High School. Raudabaugh served in World War II from 1943 to 1945.

Recipients must have lettered in two sports, be in the upper third of the senior class, be of good moral character, be willing to make needed sacrifices in order to be a god athlete, be someone other team members can look up to and be a leader, not only in athletics, but other school activities as well.

Each GHS varsity coach has the privilege of nominating young ladies and young gentlemen who qualify for the award. Each member of the Athletic Council then casts their votes for the nominee.

“The bar is really high for anybody that is able to be the Jack Raudabaugh Award winner,” concluded Shaffer.