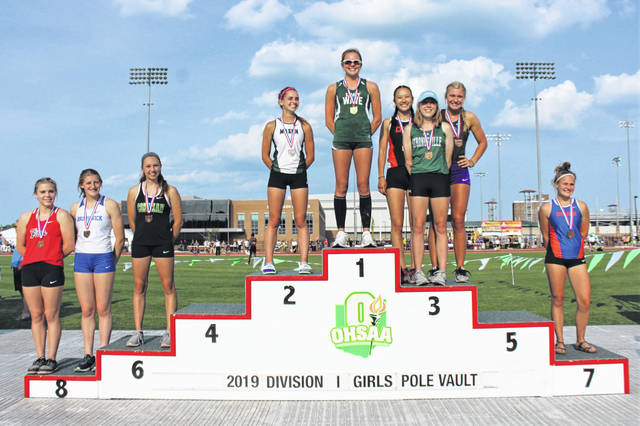 “I’m just so excited to see what comes for next year,” Hunt said following her championship jump. “This year I came into this meet – first my mindset was get the win.”

“Our first goal today was just get the win,” said Greenville pole vault coach Micah Coblentz. We are really pleased she accomplished her goal today.”

Hunt far outdistanced her sixth place 11’6” finish competing as a sophomore in the 2018 state track and field meet.

Mason’s Haleigh Eckert finished second behind Hunt with a jump of 12’4”.

“After she had the win we went to 13’3” and I wanted to let her try her 14-foot pole,” Coblentz said. “She put that in her hands and her run kind of changed so we went back to the thirteen-sevens that we had and then we ended up clearing 13’3” on our third attempt. Then she wanted to try for a new state record. I said ‘we don’t need to play with the fourteens’ because she was high enough on that 13’3’ to clear the state record again and on our third attempt we cleared that (13’7”) on the thirteen-sevens (pole).”

“I had talked to coach,” said Hunt. “’We’re going to go big today’ so my goal was fourteen, and I went out at fourteen. My second jump was so close but I have summer still to get it. I’m definitely going to get it over the summer and next year my goal is fifteen (feet) and I am super excited for what is to come.”

“She has been wanting to try and clear fourteen – that was her big goal for the year to be Ohio’s first 14-footer,” noted Coblentz. “Her second attempt the bar rattled. I’ve seen the bar rattle even worse than that and stay on but it came down after about a second or two of rattling up there. The third attempt she got into it a little bit but it really shows some promise about where she is headed and what we’re able to do.”

Coach Coblentz knows the sky is the limit for the Lady Wave pole vaulter.

“She not only improves herself physically, she tries to improve herself mentally too” Coblentz noted. “I know she listens to mental toughness type tapes. I think the reason she played golf this year was to help with her mental game and I think she also enjoys gold too. She’s trying to improve her whole person to be the best vaulter that Ohio has ever seen.”