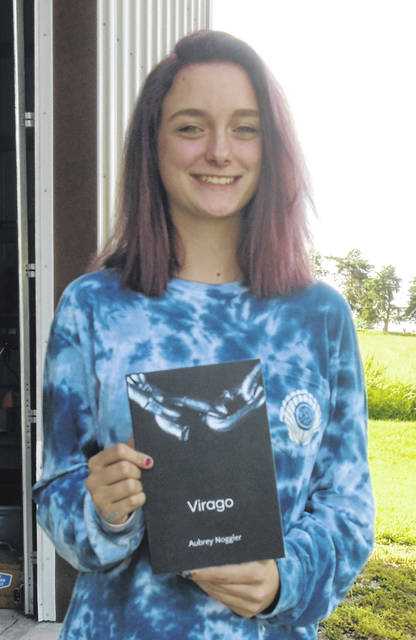 ANSONIA — Fifteen-year-old Aubrey Noggler has had her first book, “Virago” published. It came out May 2.

Noggler, who will be a sophomore next year at Ansonia High School, was asked why she wanted to do this.

“To get my name out,” the daughter of April and Todd Noggler replied. “It was always a dream of mine.”

She has penned other writings, but never had them published.

“After they changed the format, she decided to put it on Amazon,” her mother said.

Aubrey said she started the book at the beginning of the year.

The name of her book means “strong woman.”

“I came across the title from Pinterest,” she explained.

The book, it was noted, is about Zoe Harlish, an orphan teenager who lives in a half-destroyed world after World War III and what they call the Fall. Monsters roam the earth and a border was put up to keep people safe. But the border didn’t keep the people from the new government laws that had been rewritten in order to take away women’s rights. They were treated like slaves and considered unequal by every man inside the border. But this orphan had grown tired of the laws and decided to take things into her own hands with her stepbrother. The two head outside the border to find a man who could potently help them grab hold of the women’s rights and drag them back into existence.

Aubrey wants readers to follow Zoe in this exciting novel as she discovers who she truly is and what exactly she can do to help women inside the border.

She said it was another Ansonia student, Julia Kramer, also an author, who talked her through the process of book publication and introduced her to the website.

Noggler said she worked on the book whenever she could. She got her inspiration from a couple of friends at school.

“They gave me ideas and I put them altogether,” she said. “I didn’t get an editor, I had a couple of my friends edit it. I got it done a couple of months ago and we started editing it.”

In school, Noggler is active in volleyball, softball and art club. She also is in the youth group at the Ansonia First Church of God.

Aubrey said she started school at Mississinawa Valley until the family moved to Ansonia when she was in fourth grade.

In fact, she wrote her first, short book for fun in fourth grade. It was about an animal, a lovebird.

“And, I wrote a lot of short, three-page books about animals,” said Aubrey, who said her goal is to become a zoologist one of these days.

Another book she penned in seventh grade, “The Missing Gem,” was not published.

She said she plans to continue writing and possibly get more of her works published.

She indicated that teachers have said her book “Is really good.”

Were there any challenges in writing the book?

“Aubrey keeps all of her characters names and their descriptions in a folder, and I accidentally threw her notebook away last year after school was out,” said April. “I didn’t know they were in there.”

Aubrey said it was difficult, but she got her information back together to finish the book.

“When the boxes of books arrived, Aubrey was so excited,” April said. “She seemed kind of lost after she finished the book.”

But, she’s not going to stop.

“I will brainstorm on my next book,” she said. “This summer, I will be attending writing camp at Wright State University. I will be there a week to work on writing skills.”

She also plans to volunteer at school for little children in a play and will compete on the church’s volleyball team.

Aubrey has a twin sister, Alyssa, who is interested in writing, plus another sister, Chelsea, and a brother Kaiden.