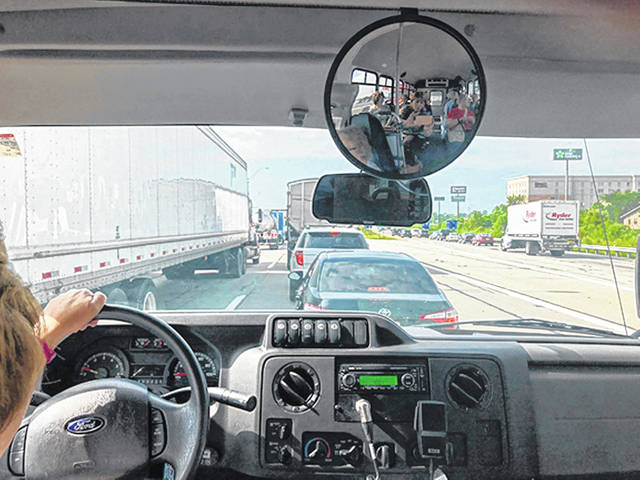 GREENVILLE — A planned shopping trip for over a dozen Brethren Retirement Community (BRC) residents took on new meaning when crossing the path of tornado-hit areas of the Miami Valley last week. Jan Teaford, BRC Housing Manager, spoke about the trip, along with Chestnut Village resident, Mary Ann Cornell on Friday.

“It was a little more than we asked for wasn’t it, Jan?” said Cornell good-naturedly about the long-scheduled trip the day after storms hit late Memorial Day. Though she had traveled on the BRC bus before, this trip was her first shopping excursion with the group.

“It was an adventure, ” said Teaford who had some initial reservations about the trip before making the decision to continue as planned. “Just had to be flexible.”

The group had a list of spots to visit that day that required only a few adjustments along the way. The travelers taking I-75 towards south Dayton, where traffic was at a crawl as snow plows cleared debris off the interstate.

Traffic further slowed as other travelers took in the devastation on both sides of the highway. The EF3 that hit the Dayton region (An EF4 in Trotwood) had done horrendous damage.

Cornell first noted a fallen white church steeple, then a motel with a missing roof over three rooms. The bus was sitting high enough for the group to see over the concrete barriers along their route. She said it was a miracle more individuals had not been hurt or killed. She shared watching the news the evening of the storms, both taking precautions such as she along with her husband, Bob, sheltered in their bathroom. They passed the time playing Gin Rummy while listening to the news reports via a slit in the doorway.

On the way home, the group traveled along I-675 and again saw the damage from the tornadoes, this time close to Beavercreek.

Cornell has friends in Beavercreek, she said, who had no power for several days. She also noted the Church of the Brethren was helping victims of the storms with water and meals.

“It was nice to see Dayton pull together to help each other,” said Teaford, who shared a social media post with pictures from that day, the group counting their blessings upon return home.

The National Weather Service lists 17 tornadoes striking the region late Memorial Day, including an EF1 in the village of New Madison and Hollansburg.