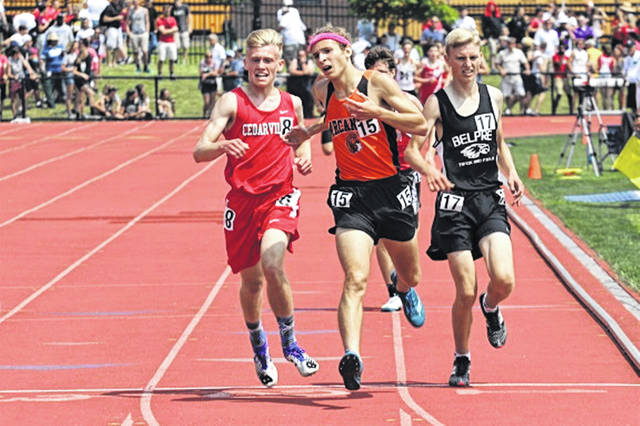 COLUMBUS – After running much of the race well back in the pack, Arcanum-Butler senior Tanner Delk made up ground to finish fourth in the boys 3200 Meter Run the OHSAA Division III state track meet at Ohio State University’s Jesse Owens Memorial Stadium in Columbus.

“That was kind of my strategy going out,” said Delk. “I knew they would go out the first lap so I was going to kind of try and sit back and work my way up from there. I just slowly started to pick them off and I definitely think I could have done it in a better time.”

“I think I could have started making moves faster and maybe not went as far back but I was just trying to get a few of them in every lap,” Delk added, “and then I just finished as strong as I could at the end because I was so close.”

The Arcanum Trojans senior finished with a time of 9:43.19 to earn the fourth place finish in his final high school sporting event appearance.

“I was excited to be seeded high enough to be able to race the top guys in the state,” stated Delk. “It was definitely more of a struggle than I expected it to be in that race, but I am still pretty happy with where I come out at the end.”