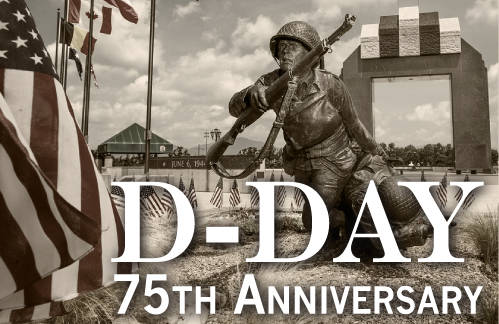 NORTH STAR — He might be 102 years old, but Charles Dunwoody remembers time spent in World War II, especially D-Day, which was proclaimed 75 years ago today.

Dunwoody went into the U.S. Army and served for three years with the 83rd Division in Europe, mostly serving as a chaplain’s assistant.

“I went in on D-Day with the Ohio National Guard Division and was there when the war ended,” said Dunwoody, who was awarded a Purple Heart and Good Conduct medal.

On Tuesday, author Kayleen Reusser’s third book on military veterans, “D-Day” came in the mail at the Dunwoody household, and the veteran began reading. One of the chapters in the book focuses on Dunwoody. The subhead on the title reads: “Soldiers, Sailors and Airmen Tell About Normandy.”

Daughter Jane Good said she contacted Reusser one day about her father.

“She was just doing the ones (veterans) from Fort Wayne, Ind.,” Good recalled. “Then, we met up in Fort Wayne.”

Dunwoody said he was struck by shrapnel a week after his division started taking part in the allied Invasion of Normandy.

“A 5 ½- ton TNT dump truck exploded and blew a window out in the aid station where I was,” he remembered. “There was a doctor in there and he patched me up. Later at the aid station, you could hear stuff going over. General Patton came in and I was on the floor half asleep, but I saw him pass by.”

Not long after arriving, there was a reorganization and his infantry replaced the 101st Airborne.

His division landed at Omaha Beach on June 18, 1944, and entered the hedgerow struggle south of Carentan on June 27. According to reports, taking the offensive, the 83rd reached the St. Lo-Periers Road on July 25 and advanced eight miles against strong opposition as the Normandy Campaign ended.

After heading to several locations, intense fighting reduced enemy strong points and a combined attack against the Citadel Fortress of St. Servan caused its surrender on Aug. 17. While elements moved south to protect the north bank of the Loire River, the main body of the division concentrated south of Rennes for patroling the Loire.

Later on, moving to the Hurtgen Forest, the division thrust forward from Gressenrich to the west bank of the Roer. It entered the Battle of the Bulge on Dec. 2., striking at Rochefort and reducing the enemy salient in a bitter struggle.

“When we got to the Battle of the Bulge, my regiment was attached to a tank division,” Dunwoody said.

After undergoing more training and rehabilitation, they advanced toward the Rhine in Operation Grenade on March 1, and captured Neuss. The division crossed the Rhine south of Wesel on March 29 and advanced across the Munster Plain to the Weser, crossing it at Bodenwerder. As opposition disintegrated, Halle fell on April 6. The division crossed the Leine and attacked to the east, pushing over the Harz Mountain region and advancing to the Elbe at Barby. The city was taken on April 3, and the 83rd established a bridgehead over the river.

On April 11, 1945, the division encountered Langenstein, a subcamp of the Buchenwald concentration camp. There, the troops found approximately 1,100 inmates, who were malnourished and in extremely poor physical condition. The division reported the death rate of the camp to be 500 per month. After liberation, the death rate continued at approximately 25 to 50 people per day.

To slow the spread of sickness and death, the 83rd Division ordered the local German mayor to supply the camp with food and water. Also medical supplies were requisitioned from the U.S. Army’s 20th Field Hospital and the division recovered documents for use by warm crime investigators.

Dunwoody said at the end of the war, his unit went through Normandy, France.

“We ended up at the Elbe River, the dividing line between Russia and our forces,” he said. “We three chaplains bought POWs back in three jeeps to the American lines. There were 10 to 12 men to a jeep. Each jeep was just loaded.”

He said it took them one week to get through France.

“As far as you could see there were tents ready to go home,” he said.

Dunwoody asked that people here at home give him two weeks two get adjusted to civilian life. Then, the man who went overseas a newlywed and came home a daddy to 15-month-old daughter, now Sally Peterson, started farming again.

The family grew with two more daughters, and a son, who died at birth.

And, the rest is history. 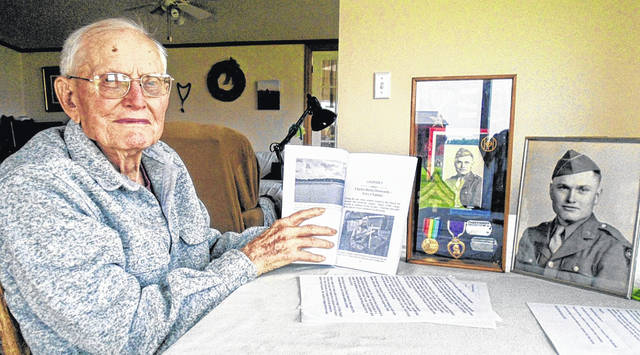