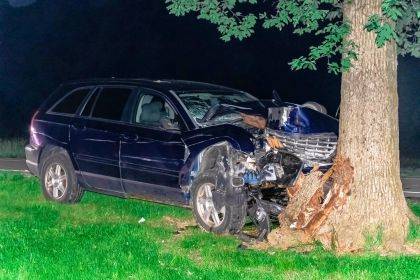 GREENVILLE – A driver was transported by a Mobile Intensive Care Unit to Miami Valley Hospital after being injured in a single-vehicle accident early Friday morning. At approximately 4:41 a.m., emergency personnel from Greenville Township Fire and Rescue along with deputies from the Darke County Sheriff’s Department were dispatched to the 6300 block of Requarth Road outside of Greenville in reference to a single-vehicle accident with entrapment.

According to the Darke County Sheriff’s Department, a preliminary investigation into the accident has revealed that a blue 2006 Chrysler Pacifica, driven by 26-year-old Christopher Jones of Greenville, was travelling eastbound on Requarth Road, near Westfall Road, when Jones failed to maintain control of his vehicle and traveled off the right side of the roadway coming to rest after striking a tree.

Jones was extricated from his vehicle by non-mechanical means by Greenville Township Fire and Rescue before being transported to Wayne HealthCare for his injuries. A Mobile Intensive Care Unit from Miami Valley Hospital was requested to Wayne HealthCare where Mr. Jones was then Transported to Miami Valley Hospital where his condition remains unknown at this time.