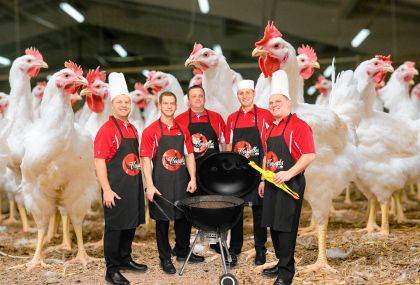 GREENVILLE – Poultry Days will be celebrated June 14-16 in Versailles with a theme of “Rock -n- Roll All Night & Poultry Every Day!” Think early 1970’s hair bands, rock and roll with a poultry twist! Last year 28,420 dinners were sold pushing the total sold over one million. 30,000 dinners have been ordered and the dinner price will remain $8. Dinners include half of a slow barbecue chicken with a secret recipe, Mikesell’s chips, applesauce, roll and the traditional orange drink. Sales begin at 3:30 p.m. Friday, 11:30 a.m. Saturday and 11 a.m. Sunday.

The festival will open on June 14 and include Congressman Warren Davidson joining them for the Flag Raising Ceremony. Jim and Julie Poeppelman have been selected as Honorary Grand Parade Marshals which will held at 11 a.m. on June 15. The Antique Car parade will be held at 2:30 p.m. on June 16, with an antique car display beginning at 10 a.m. with registration the day of the event.

Social Tent entertainment includes Saw Creek, Tricky Dick & The Cover Ups and new to the festival Brother Believe Me and Kaitlyn Schmit & The Move. New this year the festival will offer craft beers from Moeller Brew Barn, Lake Rat Brewing, Tailspin Brewing Co. and Endless Pint Brewing in addition to beverages from The Winery at Versailles, MillerCoors and Anheuser-Busch

The granddaddy of Ultimate Frisbee tournaments returns, increasing teams to a record 72 teams from throughout the United States with matches occurring on the Festival Grounds. The Premier Ultimate Frisbee League will conduct a match between the Columbus Pride and Indianapolis Red on Friday inside the track at the festival. The league is a new women’s professional ultimate league featuring teams throughout the USA. Tickets for this match can be purchased at the gate or online at: https://indyred.org/tickets/.

Poultry Days welcome visitors to their festival and community June 14-16 like it has for the last 68 years. The full festival schedule and event registration can be located at www.versaillespoultrydays.com or follow them on Facebook for updates.