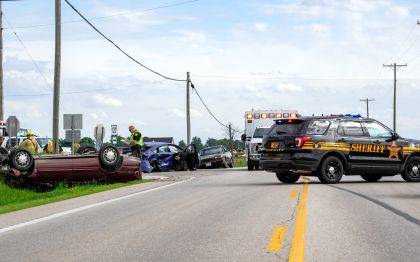 BUTLER TOWNSHIP – A three-vehicle accident early Wednesday evening has left three people being transported to an area hospital for their injuries. At approximately 4:58 p.m., Emergency personnel from the New Madison Fire Department as well as Tri-Village and Arcanum Rescue were dispatched to the intersection of U.S. Route 127 and State Route 503 in reference to a three-vehicle accident with injuries.

According to the Darke County Sheriff’s Department, a preliminary investigation into the accident has revealed that a blue 2013 Ford Fusion, driven by 19-year-old Shawna Osborne of Greenville, was traveling southbound on U.S. Route 127 when Ms. Osborne attempted to make a left-hand turn southeast onto State Route 503. Ms. Osborne failed to notice and pulled into the pathway of a northbound red 2002 Buick LeSabre, driven by 33-year-old Diane Dixon of Ansonia, which struck the Osborne vehicle. Ms. Dixon’s vehicle overturned as a result of the collision striking a third vehicle, a white 2004 GMC Yukon driven by 25-year-old Travis Hines of Winchester, Ind., that was traveling northwest on state route 503 and had stopped at the stop sign located at the intersection.

Ms. Dixon and her 8-month-old child, who was restrained in a child seat in the back seat of the overturned vehicle, were treated on the scene by Tri-Village Rescue before being transported to Wayne HealthCare in Greenville for their injuries. Ms. Osborne was treated on the scene by Arcanum Rescue and transported to Wayne HealthCare for minor injuries as well. Mr. Hines and his front seat passenger were uninjured in the accident.