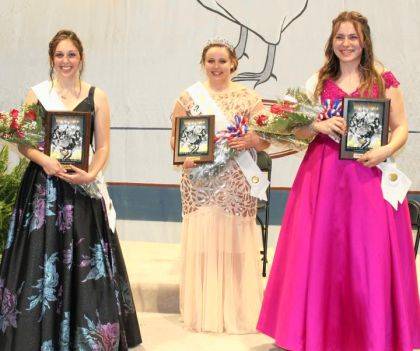 VERSAILLES – Six girls were grilled over two days of the Poultry Days Festival in their attempt to earn the title of Miss Chick and join a select group of women that have held that title since 1952. On Saturday afternoon, in front of a gymnasium full of onlookers, Courtney Batten was named Miss Chick.

After the event, Batten tried to convey how she was feeling, “Super stoked,” she said. “I’m so excited. I can’t wait for this year to begin and hang out with the other court members.” The new Miss Chick also said she is ready to begin advocating for her hometown, Versailles, and Poultry Days.

This was Batten’s second time to participate in the pageant. “I did it last year and didn’t make the top five,” she said.

Batten was sponsored by the Versailles FFA and is the daughter of Suzanne and Chris Batten.