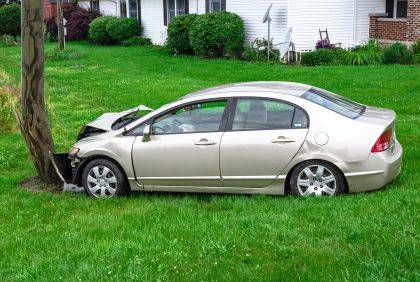 BROWN TOWNSHIP – A Tuesday morning crash left a driver injured after falling asleep behind the wheel. At approximately 9:10 a.m., emergency personnel from Ansonia Fire and Rescue along with deputies from the Darke County Sheriff’s Department were dispatched to the 10000 block of State Route 49 North in regards to a single-vehicle accident with possible injuries.

According to the Darke County Sheriff’ Department, a preliminary investigation into the accident revealed that a silver Honda Civic was traveling southbound on State Route 49 North when the driver, who admitted to having fallen asleep at the wheel, veered off the right side of the roadway to avoid rear-ending a semi-tractor and trailer slowing to make a stop at the intersection of State Route 49 and State Route 47. The Honda came to rest in the lawn of a private residence located at 10616 State Route 49 after colliding with and breaking off a utility pole. The male driver, being the sole occupant of the vehicle, was treated on the scene by Ansonia Rescue for minor injuries before refusing any further treatment and transport to a medical facility.