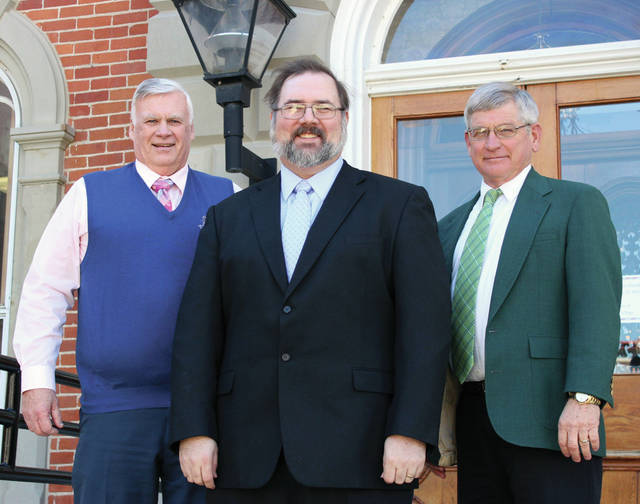 On Wednesday, county commissioners, along with county engineer Jim Surber opened a bid from Wall Brothers Asphalt for county and township road paving projects that will total $2,359,635.35 – about $11,000 over Surber’s original estimate.

Wall Brothers was the only bidder on the paving projects.

Surber said he’s counting on an $800,000 Ohio Public Works Commission grant, which should be made available around July 1, to help pay for the paving of 16.26 miles county roads and 13.45 miles of township roads.

“That’s 29.7 miles of roads spread out over the county,” Surber said, which will be paid for with both local funds and the OPWC grant.

The paving projects are expected to be completed by Sept. 15.

Walls Brothers also submitted a bid of $81,894 on a separate paving project for Grubbs Rex Road in Butler Township.

Butler Township Trustees will be responsible for signing a separate contract with the paving company for the Grubbs Rex Road project, Surber said.

Also Wednesday, commissioners approved a letter of recommendation concerning road and bridge improvements that will need to be made to the Hiestand and Rhynard-Fink Road area to establish a truck route from State Route 118 to the proposed Golden Heritage Egg Farm.

The letter of recommendation includes an overview of improvements needed to support an increased flow of traffic if the egg farm is approved.

According to Commissioner Matt Aultman, commissioners received notice from the Department of Agriculture alerting them to the proposed egg farm and the need for road improvements. Commissioners have 30 days to respond with a proposal.

“According to the Ohio Revised Code, if we didn’t respond, they would use the roads anyway” in their current condition, which would result in taxpayers having to eventually foot the bill when improvements are needed.

The letter approved by commissioners on Wednesday included a list of repairs and improvements prepared by Surber, who ultimately approves the work, which would be completed by a contractor hired by the egg farm.

The estimated $1,552,400 infrastructure project would be paid for through a TIF – tax increment financing – using property taxes assessed to Heritage Egg Farm, which will eventually house 2 million chickens, Surber said.

Aultman said an estimated 30 trucks are expected to travel to and from the egg farm on a daily basis.

“We have to make sure the roads are up to standard and for traffic increases,” Aultman said Wednesday.

In other action Wednesday, commissioners approved a notice to proceed with Arcon Builders Ltd. for the new security entrance at the Darke County Courthouse. The project is expected to be completed by Dec. 15.