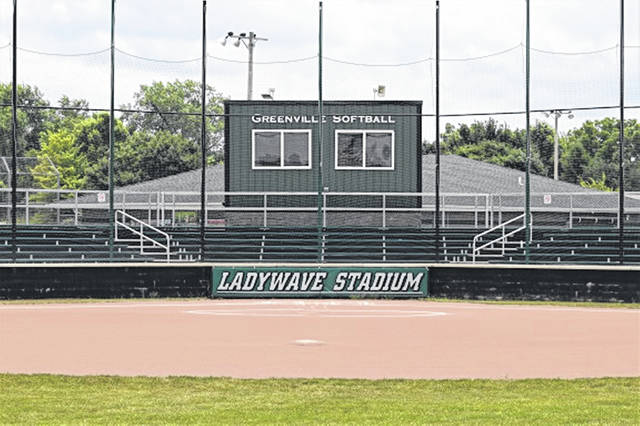 GREENVILLE – The Treaty City Shootout is fast approaching as 32 teams will be converging on Greenville’s Stebbins Field for a weekend of girl’s 8U and 10U fastpitch softball.

“We have a total of 32 teams committed,” said Greenville Girls Softball Association (GGSA) president Eric Fellers. “We are full. We’re not going to take on anymore because of diamonds and time restraints so we will be full for this weekend. We’ll start playing late Friday afternoon and go all the way through Sunday. It will be huge for Greenville and the community.”

“This town is known for its softball,” said Fellers. “Jerrod (Newland, I thought he was crazy a couple of years ago when he wanted to build that stadium. People want to come and play here now.”

“We continue to try to add things and make it better each year,” continued Fellers. “It takes help and it takes community support. We do get that so every year we’re going to come up with some crazy hair-brained idea and we’re going to try and make this place better.”

“They’re coming from Cincinnati, the Toledo area, Brownsburg, IN.,” Fellers said of the upcoming weekend tournament. “They are going to be staying over in this area at our hotels and buying food and going to places like that, so it is going to be really good for Greenville.”

The Greenville tournaments played at Stebbins Field are known for quality officiating.

“We bring some of the best,” noted Fellers. “I can’t thank those guys enough because they come and do multiple games – a big thank you to them.”

With 32 teams coming to the city, it takes a well-organized organization to make the weekend run smoothly.

“Jason Christman is our tournament director,” Fellers stated. “He has been our tournament director for the last three or four years now and he has done an amazing job making contacts and getting people interested in coming to Greenville Girls Softball to play these tournaments at Stebbins Field. We have our officers that help in the concession stand and some of the parents are coming in and helping when their kids aren’t playing, so it’s a big help.”

The Treaty City Shootout is just one of many fundraisers used to maintain and upgrade the Stebbins Field facility.

“The tournament generates much needed funds with the concessions, t-shirt sales and things like that,” said Christman. “It should be a great weekend.”