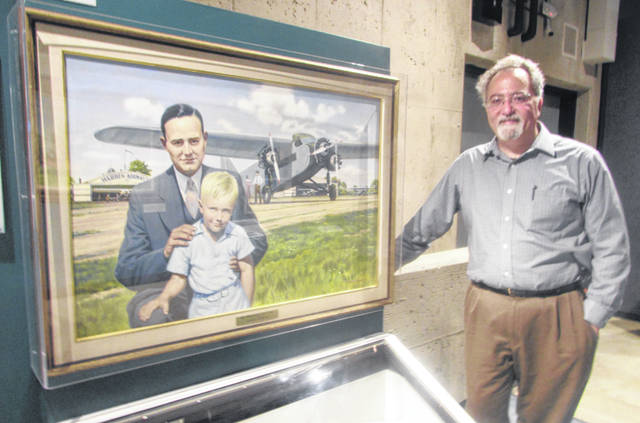 WAPAKONETA — Armstrong Air & Space Museum is keeping Neil Armstrong’s memory alive by displaying numerous memorabilia and artifacts from when he was a boy to when he completed the Apollo and Gemini 8 missions.

Visitors are given an insight into Armstrong’s life as a boy when they view a painted photo of Armstrong and his father next to a Ford Trimotort airplane taken at an airport in Warren, Ohio, July 26, 1936, when Armstrong became interested in flying. He got his pilot’s license at age 16 before he got his drivers license.

“The cheaper flights were on Sunday morning at the airport so as the story goes he wanted to get out of Sunday School to go on airplane rides and that’s what started his passion for flying,” said Dante Centuori, museum executive director.

A glass case provides glimpses into Armstrong’s life as a young boy. There is Armstrong’s savings bank, his lunch pail used in his first grade and a camera from his youth. A photo of a rocket drawn by Armstrong also is displayed as well as a patrol flag for the Boy Scouts signed by Armstrong. Also on display is a wind tunnel generator science fair project and a generator he made.

“You can see the elements of a young engineer right here and it’s a kind of thing young people can relate to because when your young you have interests,” Centuori said.

A high school yearbook is on display from 1947 at Blum High School where Armstrong attended and shows photos of him in the band and Student Council.

Armstrong’s Navy uniform also is on display as well as his brown leather fighter pilot jacket and a replica of the airplane he flew and his flying helmet that has a headset for communication when he flew in Korea.

The space suit, helmet and gloves Armstrong wore on his Gemini mission are on display that was his first space flight in 1966.

“Armstrong used the large zipper in the back to put his space suit on and take it off and layers of material protected him from the extreme weather conditions of the space environment,” Centuori said.

A Gemini Spacecraft VIII capsule that he flew in March 16, 1966, is on display that was designed by NASA.

A Aeronca 7AC Champion plane that Armstrong learned to fly in 1946 at the Port Koneta in Wapakoneta when he was 16 is at the museum.

There are photos of Armstrong learning to live off the land during emergency earth landings training, and a machete during survival training in Panama.

“If they had an emergency landing they had to train if they landed anywhere on earth. Most of the land under the orbital paths was a jungle,” Centuori said.

Armstrong’s pilot boots and parachute also are on hand at the museum as well as keyboard hardware that Armstrong would have used to enter to program the plane. Armstrong had to eat when he was in space so packets of applesauce, coffee, soup, tuna salad and beef and poatoes were on display where there were ports where he could add water.

As far as a lunar module that was stolen from the museum July 28, 2017, Wapokenta Police Chief Calvin Schneider does not know where the lunar module is and said the FBI is looking into it.

Centuori said the musuem filed the theft report with the Wapokeneta Police Department and said it is still an open case and there have not been any updates. He said it is a one of a kind module that cannot be replaced.