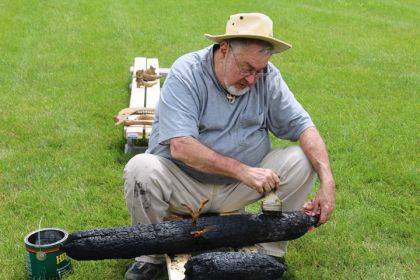 A lot is known about Fort Greene Ville, but it wasn’t the only fort in the area. A few miles south of Greenville, along State Route 121, is an area known as Fort Jefferson. This was an actual fort that was used from 1791 to 1794. The only reminders of the fort today are a monument in the roadside park and the name of the town.

There is very little history recorded about the importance of Fort Jefferson, but it played an important role in Fort Greene Ville’s history as it served as a supply depot.

A group of volunteers has formed to study Fort Jefferson and are working to tell its “amazing story and importance in American history,” said Dr. David Cox.

The group is currently working to preserve several logs that were most likely used at the fort. The burnt logs were discovered in a well and have been in storage at Garst Museum for the past 90 years. Dr. Cox explained the logs were deteriorated when they were found in 1930 and little has been done to preserve them since.

These logs were part of a windlass and possibly used to raise water from a well for the soldiers at Fort Jefferson. The well where the logs were found is believed to be outside the fort. Cox said, “For protection, a tunnel connected the well to the southwest blockhouse at the fort. The tunnel was made by digging a deep trench and lining it with puncheon logs. It was then topped with logs and covered over with dirt, which made the trench into a tunnel.”

Dr. Cox isn’t sure if the preserved logs will ever be displayed or if they will only be used to bring attention to the fort.

“We are lucky to have Garst Museum storing these artifacts of history,” he said. “Give them a visit and learn about Greene Ville’s contribution to the founding of our country and the establishment of the first standing army of the United States.”