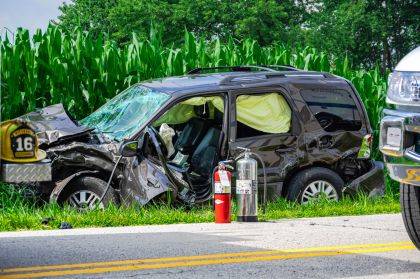 FRANKLIN TOWNSHIP – A two-vehicle accident Friday led to the injuries for both drivers. At approximately 10:12 a.m., emergency personnel from Arcanum fire and Rescue, Pitsburg Fire and Greenville Rescue responded along with deputies from the Darke County Sheriff’s Department to the reports of a two-vehicle injury crash near the Delisle-Fourmans and Red River-West Grove Roads intersection.

According to the Darke County Sheriff’s Department, a preliminary investigation into the accident has revealed that a gray 2007 Mercury Mariner driven by 66-year-old Pamela Snyder, of Ansonia, was traveling north on Red River West Grove Road. Ms. Snyder’s vehicle entered the path of an eastbound 2007 tan GMC truck driven by 43-year-old Roland Fox, of Laura causing a collision between the two vehicles. Ms. Snyder’s vehicle continued off the right side of the roadway coming to rest at the edge of a field while Mr. Fox’s vehicle traveled off the left side of the roadway coming to rest in the front lawn of a private residence located at 9510 Delisle-Fourmans Road.