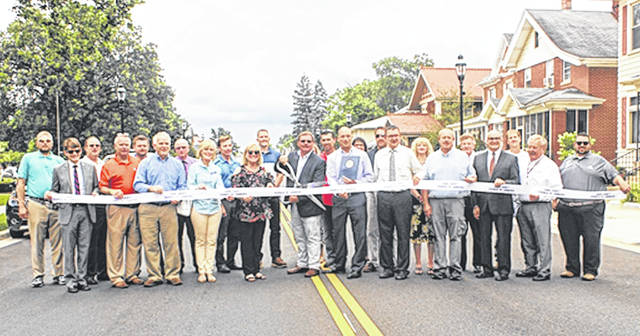 GREENVILLE – At the intersection of Fourth and Sycamore Streets, the city celebrated the fruits of their labor with a ribbon-cutting Thursday afternoon.

The $3,138,000 Fourth/Sweitzer Street Reconstruction Project is officially complete. It was a lengthy one, but in the end, the almost half-mile street has new water lines, sanitary sewer, storm sewer, curb-gutter, sidewalks, street lighting, and street construction.

The project was made possible thanks to a grant from the Ohio Department of Transportation (ODOT) and the Ohio Public Works Commission.

ODOT awarded the city $1,218,720 through the Small City Program which provides Federal funds to small cities with populations from 5,000 to 24,999.

ODOT Capital Programs Administrator, Matt Parrill, for District 7, shared information on the Small City Program. Localities may use the program for any road, safety, or signal project on the Federal-aid system. For example, it may be used for roundabouts, signals, road widening, and other related transportation projects.

The Fourth/Sweitzer Street Reconstruction Project was also made possible thanks to the Ohio Public Works Commission awarding the city a $450,000 grant. Between the two grants, the City of Greenville covered the remaining $1,469,277.84 with various enterprise funds and the Capital Improvement Program (CIP) fund.

ODOT awarded the contract for the project to Brumbaugh Construction with the work beginning in May 2018.

Garrison also thanked Troy Myers with Brumbaugh Construction, “As a community, we want to succeed, but we succeed only if our businesses succeed. Troy and Brumbaugh had a direct impact on that success.”

Garrison pointed out this is the third project with Brumbaugh in as many years.

Darke County Chamber of Commerce President Sharon Deschambeau also spoke, stating the City of Greenville has been a valued Chamber member since November 2008.

“We are always excited to help a business or government entities celebrate a project, especially one of this magnitude,” said Deschambeau. She went on to explain how infrastructure improvements such as the Fourth/Sweitzer Street Reconstruction Project support multiple businesses.

Mayor Steve Willman had similar sentiments on partnerships, and how ODOT’s assistance made the project possible and allows the City of Greenville to make other improvements.

Those also in attendance for the ribbon-cutting included Darke County Chamber of Commerce representatives, city council members, school officials, ODOT, and many other project-related representatives.