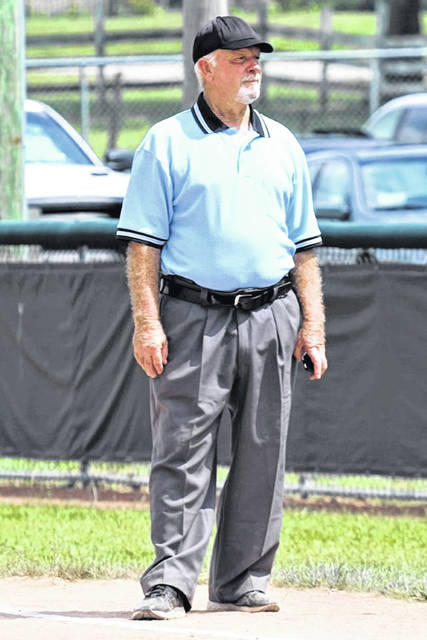 GREENVILLE – Richard Jordan turned 70 this past Sunday, July 21 and is still umpiring after years of service to sports programs.

Jordan was born in Melton, WV and moved to North Carolina where he called home for 25 year where he first got exposed to officiating.

“I transferred my qualifications with North Carolina to Ohio through the OHSAA,” said Jordan. “I was immediately accepted as a Class 1 Official in Ohio in baseball, softball and volleyball.”

Jordan also officiated high school soccer and junior high basketball but due to bad knees made the decision to give up soccer and will undergo knee surgery this October.

“I think I can do a couple more years,” Jordan stated. “I’ll see what happens after knee surgery this October and make a decision and go from there, but I wouldn’t change anything.”

“The game is still the game and umpires are still umpires except for professional and unfortunately the umpire is going to be a dying breed in baseball and it will be done by computers,” Jordan said of future major league umpiring. “Fans can yell all they want at a computer because it will not hear them.”

Jordan enjoys umpiring at any level and can often be seen taking extra time with a young player that may have been hit by a pitch or made a hard slide into a base.

“I enjoy interacting whether it’s high school or eight year olds,” said Jordan. “The reward is karma. When you’re out there and a young lady or gentleman makes a play and you can see the karma come off of them. It just rubs off on me so that’s my reward – to see that and at the same time enjoy. It’s just fun being out there. Is it hot – yes, but it beats sitting home watching TV.”

Ohio along with the nation is losing high school officials in alarming numbers with more than 800 each year hanging up their uniforms. Jordan took time to give his thoughts on the ongoing problem.

“Fans immolate professional sports so if it’s ok to do it professionally then it’s ok to do it locally,” stated Jordan. “They see it at a professional park so they look at it as being part of the game. We old officials are kind of thick skinned, however, now it’s become more violent. I have experienced violence recently and I can see it coming. I know which way to exit and avoid confrontation.”

“Parents want their child to succeed, to be a winner. Well, everybody can’t be a winner. There’s a loser and there’s a winner. There’s very seldom ties in sports and I get it that. Parents are also reliving their youth. It’s much more fun if they would just complement, applaud, show what real sportsmanship is like and teach instead of being so negative – that is what I would like to see.”

“When you go to the high school level, I’ll allow some chirping but there is a point to where that’s ridiculous also. We are losing officials and it’s mostly fans chirping that a young person, male or female doesn’t have to put up with. The game is still the same game, it’s still played the same way.”

Officials have to understand coaches in rec leagues are volunteers and sometimes they are catching more grief from parents than we do but still they have to get past the anger part of a play that doesn’t go their way. I don’t know any official that cheats – not to a kid and not at the high school level.

“You’re taught, see, read, react, make a call and that is all within two seconds so it has to happen quickly. Officials aren’t correct one hundred percent of the time. We can’t, but we’re pretty close because what we are taught to look at people don’t look at”

“What we are looking at is different from a fan who is watching the ball come across and they don’t see the foot. Sometimes they do, sometimes they don’t but we’re taught where to be, what to look for and then take your time and make the call. An official will make fifty percent of the people happy with every call.

Jordan believes and knows the good far outweighs the bad when it comes to officiating and hopes young people will get involved with officiating.

“I would love to see kids get involved,” Jordan said. “It takes a mentor to really take a young person along. The umpiring associations that I have been around here try very hard to recruit young people. They will mentor and they will help them get there, but it takes several years for a young person to start being comfortable, to get back there and call balls and strikes and ignore what is coming from what you hear and ignore it – it just takes that long before they get that comfortable, It takes a few years but I hope young people get involved.”

Now in the twilight of his career, Jordan shared his thoughts on officiating most fans don’t know about, think about or understand all that comes with officiating our kids’ sports.

“People don’t take into account of what kind of day I had before I got there,” Jordan shared. “They don’t know if it was a great day or if I had a tragedy in my life. They don’t know how I feel physically – if I hurt. They have no clue as to; am I out there in pain. I have done some games this year where literally tears have come from my eyes because of the pain I have with my knees – and I’m there.”

“There are lot more good parents, fans, coaches and athletes than bad ones,” Jordan concluded. “It’s been rewarding, it’s been a good road and I’ve enjoyed it.”