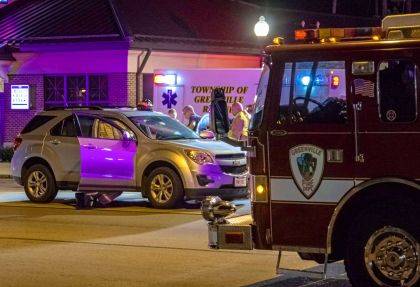 GREENVILLE – A Wednesday evening two-vehicle injury crash ended with a driver being transported to the hospital with minor injuries. At approximately 10:04 p.m., emergency personnel from the Greenville City Fire Department, Greenville Township Rescue as well as officers from the Greenville Police Department responded to the intersection of East Main and Walnut Streets in reference to a two-vehicle injury crash with possible entrapment.

According to the Greenville Police Department, a preliminary investigation into the incident revealed that a black Jeep Cherokee was traveling northbound on Walnut Street when the driver failed to notice and stop for a red light. The Jeep entered the intersection and collided into the driver’s side of a silver Chevrolet Equinox traveling westbound on East Main Street.

The female driver of the Chevrolet was assisted from her vehicle by Greenville City Fire prior to being treated on the scene by Greenville Township Rescue and transported to Wayne HealthCare for what was described as minor injuries. The male driver of the Jeep was examined on the scene before refusing treatment and transport to a medical facility.

The accident will remain under investigation by the Greenville City Police Department.