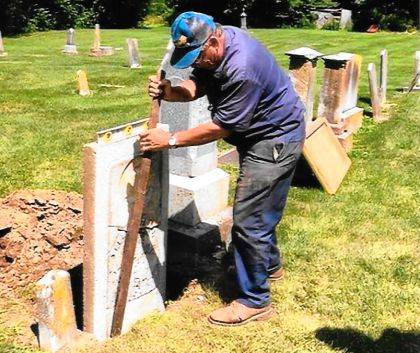 GREENVILLE – Darke County has a rich history from as early as 1791 when Major General St. Clair intended to cut a wagon supply road from present day Cincinnati, to the site where Gen. Harmar was defeated later to be Fort Wayne, Ind. Fort Jefferson was erected as a support fort on a gravel knoll five miles south of present-day Greenville. Ensign Samuel Beatty was the young officer in charge of the fort construction.

Due to this military assignment one of the early settlers in Darke County was Samuel’s nephew, Thomas Beatty. Thomas remained in the Neave Township area near the village of Fort Jefferson. He was buried in the Fort Jefferson Pioneer Cemetery in 1855.

In more recent history, during the 1900’s, three Beatty brothers, Ralph, Carl, and Elmer, descendants of Thomas Beatty, were life-long residents of Darke County. Some of the children and grandchildren of these brothers are fifth and sixth generation ancestors of Thomas and are still residing in Darke County.

Joe Beatty, Ralph’s son, has taken an active interest in the history of the Beatty family. It is important to him to teach his grandchildren about their ancestry and the associated history. Because of the work Joe has invested in historical research, he has been invited to give presentations at the Fort Recovery Museum, school groups, and military audiences to tell the story of five Beatty soldiers that were part of the St. Clair campaign.

During a visit to the Fort Jefferson Pioneer Cemetery, Joe discovered the original grave marker for Thomas Beatty was broken into four fragments. He along with help from family members Joe and Don Delaplane, sons of Joe, and Paul Miller, were able to repair the original headstone.