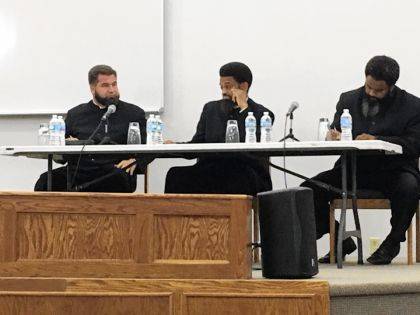 GREENVILLE – With picketers standing at the entrance to the Church of God driveway, approximately 15 non-members from the public were inside the church learning more about what the church believes and how it operates. The meeting was the result of the message picketers were sharing outside the church and many of the comments made on social media. The church ran an advertisement in The Early Bird inviting the community and specifically listed several individuals. Those individuals were not in attendance.

Ray Tinsman, an apostle with the church and pastor of the Greenville congregation, said, “The purpose of this meeting is to be transparent and open and to allow the community and individuals to ask questions of things perhaps they’ve heard or not heard.” Ben Hartlieb, a former member turned atheist, served as the moderator. Tinsman said, “He’s not really someone who is biased to our side. However, I have enough confidence in Mr. Hartlieb that he will be fair to us.”

Pastor Tinsman also invited visitors to tour the building. All rooms were available for inspection and with a laugh said “to see all of the secret compartments or whatever they say.” He firmly stated the church does not have a cache of weapons and has never had a cache of weapons.

Tinsman seemed to be honest with his answers to questions from the public, some of which were from former members of the church. In one series of exchanges between Hartlieb and Tinsman, Hartlieb asked if the church was a cult. Tinsman asked for a definition of the term, but Hartlieb enlisted a “lightning round” of a series of questions that are most commonly associated with a cult.

Is there absolutely authoritarianism without meaningful accountability? Tinsman responded, “True to us as a leading body.” However, he believes they are held accountable outside the body and even to the congregation when it comes to doctrine, finances and to the law of the land. He did state the congregation is not democratic.

In some of the other questions regarding cults, Tinsman believes they aren’t accurate to their church or leadership. Their budgets are open to the congregation, members are aware of the outside world, former members don’t relate the same stories of abuse or grievances, and he doesn’t believe the group or leader is the exclusive means of knowing truth.

He does believe there is no legitimate reason to leave the church and former followers are wrong in leaving. When asked if the group’s leader is always right, Tinsman responded, “Conditionally. If you’re speaking of the leadership and we’re going to do what the leadership wants to do. Theologically, you can’t contradict established truth.”

When asked if the church uses a process of indoctrination or education that’s coercive persuasion or thought reforming, commonly called brainwashing, he responded affirmatively, but added, “I would say so is Fox News and CNN.” He clarified that they don’t coerce people.

Tinsman welcomed all questions from church discipline, families with non-members and the use of law enforcement.

Does the church keep families from seeing family members that are not part of the church? “We have many, many families that have extended and immediate families that are not part of the church that have excellent relationships,” he said. “But to be fair to your question, we do believe in excommunication. That has happened twice, officially. More times unofficially when someone would come and try to lure away to a lifestyle in which we would not approve of. In those cases we would excommunicate them. Generally speaking, we would not.” A question later in the evening came from a former member who asked why members of the church had distanced themselves from her. Tinsman pointed out the church is leery of people that may try to lure the congregation away from the church. If a person is excommunicated the congregation can have no contact with that individual. “It would be extreme circumstances,” said Tinsman.

For illegal actions, the church will not only institute church discipline, but will also go to law enforcement. Tinsman said, “If anything that was done that is illegal, any kind of abuse of any kind, I personally have called the Sheriff on numerous occasions of things that I have learned that have happened in our… and have reported it. Not only is it okay, but I would think that it would be a must. I can’t imagine anybody hating abuse more than us.”

Hartlieb brought up a case that happened in Louisiana over 22 years ago where three children were violated by a minister. The ministers in that case let the parents of the children decide if the minister should be turned over to the authorities. He said if the children, who are adults now, were to report the incident they would have his full backing. “We wouldn’t handle it that way today, at all. In fact, we have particular cases that I could prove to you – we wouldn’t give the option to the parents of the child. We would report it ourselves.”

Members of the church are free to leave, but that doesn’t mean the leadership won’t try to keep them in the church. “There is a lot of pressure to keep them here,” he chuckled. “Unless we can come to terms that we can’t agree then they can leave. We want to keep them.”

The church is anti-denomination. He said they are against religious systems, but not the people. “I have an excellent relationship with other pastors, but their system I would not involve myself in,” he said. Hartlieb asked if there are saved people that are not members of this body. “Absolutely,” Tinsman said. “Nobody is unsaved for something they don’t know. If they know something and go back on it they would be unsaved.”

Tinsman was asked why he needed to have a gathering like this to explain his beliefs when other churches don’t need to have similar meetings. “I will answer according to what I think,” he said. “We are a different people and we look different, we act a little different, we dress different, we’re strange, not really, but I think it looks like we’re strange. I think it makes us a suspect for that and I add to that Christians since the time of Christ have suffered these kinds of things.” 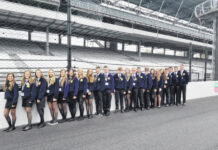 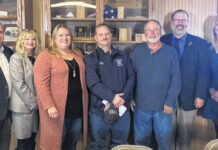