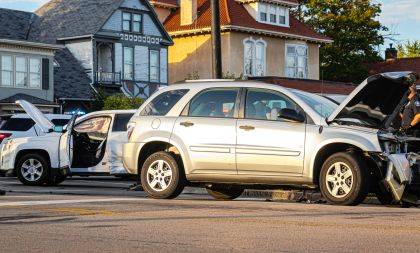 GREENVILLE – Both drivers involved in a two-vehicle crash Thursday evening were able to avoid injuries after a collision that left one vehicle jumping the curb and coming to rest on a sidewalk. At approximately 6:09 p.m., emergency personnel from Greenville City Fire and Greenville Township Fire and Rescue responded along with officers from the Greenville Police Department to the intersection of Walnut and East Main Streets to the report of a two-vehicle crash with possible entrapment.

According to the Greenville Police Department, a preliminary investigation into the incident revealed a white GMC Terrain was traveling west on East Main Street when the driver failed to notice and stop for a red light pulling into the path of oncoming traffic. A silver Chevrolet Equinox traveling southbound on Walnut Street collided with the Terrain striking it in the driver’s side door area of the vehicle and forcing the Terrain over the curb onto a sidewalk.