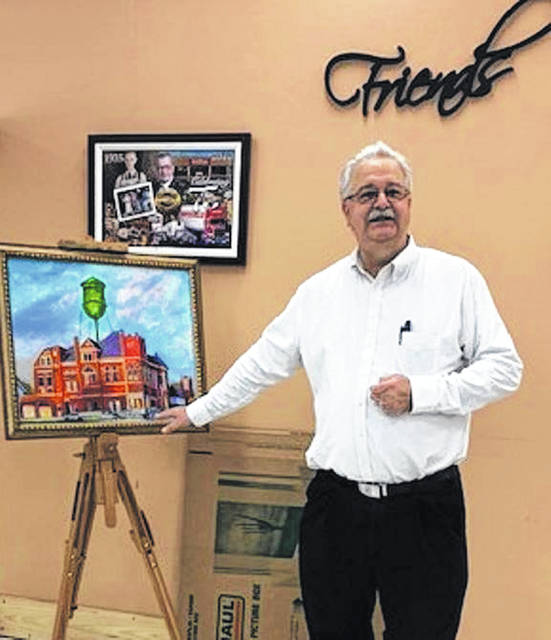 ARCANUM — On Saturday, Oct. 26, Sutton’s Foods was host to the grand unveiling of Roger Snell’s painting, “A New Day in Arcanum.”

Sutton’s has also announced they will display and sell this original painting, with a portion of the profits to benefit the new non-profit Arcanum Preservation Society that is now being formed to save the former Arcanum City Building.

The original, acrylic painting is 22×28” on canvas is the creation of former 1977 graduate, Roger Snell, who stated “…you can leave Arcanum, but it never leaves you.”

Snell left Arcanum to study journalism at The Ohio State University a long time ago, but still calls Arcanum his hometown.

The painting is of Arcanum’s old town hall and the water tower on West South Street looking west. Snell will donate 10 percent of the profits from the painting and other items available for purchase to the Arcanum Preservation Society for use to preserve the old city building.

Prints and other items are available from www.fineartamerica.com under Roger Snell Art. Check it out — you might want to do some Christmas shopping and help out the newly formed Arcanum Preservation Society.

Members of the society present for the unveiling of the painting were Brad and Dee Troutwine, Annette Stewart, Bev Rench, and Angela and Tim Herron. Also in attendance at the unveiling was Garry Handshoe, retired art teacher from Arcanum, Kirby Sutton and Josh Urlage of Sutton’s, Linda Snell, the artist’s wife; Rosella Snell, his mother, and Tony Gaier, brother-in-law. Snell also is a Pulitzer Prize author and had a 19-year career as a journalist and reporter.

Maybe you are asking yourself, what’s so special about this old city building? It sits on the southwest corner of High Street and West South Street in Arcanum, three-stories high. Construction began on April 1, 1889, by Daff Vashti Zimmerman who was the brick contractor of the building. Bonds were sold to raise the funds needed to construct the three-story Victorian-Romanesque structure that cost $12,000 at that time and was recorded. It wasn’t until a year later that the building was inhabited as the funds raised only covered the construction and not the interior to be completed. Bonds were again sold beginning May 1890 for the cost of the interior. The building was dedicated in February of 1891. For over a century it housed both the Village offices and the offices of Twin Township, serving as Township Hall on the first floor.

For many years, it also housed the police department and the fire department. The second floor was home to The Opera House and was the center of community social activities. It served as a movie theatre, stage show and comic opera productions, boxing matches, political rallies, and was the venue for high school graduation exercises for many, many years.

The building originally had two bell towers and it is not known when the first bell and tower were removed, but it is thought that it was around the time that an electric fire siren was installed. Portions of the building were also rented to businessmen including Dr. G.B. Hale, James Heck Real Estate, Carroll’s Radio Service, and Strader Magazine Service.

A 1910 census of Arcanum reveals there were 1,361 residents within the city limits and 2,925 in Twin Township. In 1917, both the interior and the exterior received a major renovation. The building was the center of attention for all social events until the new school house was built on East South Street in 1924. Soon, social gatherings moved to the auditorium of that new building.

The rooms upstairs were eventually converted by the American Legion and later the VFW, and now the Lions for their group meetings and events.

In an article on the building published by The Early Bird and written by JoKay Miltenberger in 1985, she stated “…if the old structure could speak, it would probably recall its finer days and hope for preservation in the future. One relic of the past remains in perfect condition, the huge brass bell, once rung to call local firefighters to duty, still hangs in the belfry. The gem is a lasting specimen in brass of our heritage.”

She went on to state “Today adjectives tall, majestic, handsome and proud come to mind when viewing the building from a scant block away.”