BRADFORD — Dreams are like a fine wine — it takes time to bring to fruition.

For Danielle and Shaun Pierce, years of hard work brings them to the cusp of pay-off as the couple anticipates opening Twenty One Barrels Cidery and Winery on the outskirts of Bradford in June 2020.

“There is no go-to book on opening a winery,” said Shaun Pierce on a cold Halloween evening as he explained how their journey began several years ago. Not only did the couple visit and network with wineries local and in various states but attended conferences, classes, and even joined a wine association.

In time, they were making their own wine and hard ciders, ruminating over the first batch that was, in their words, “terrible” before perfecting their work leading to award winners. This included the INDY International Wine Competition that welcomes some 2,000 entries from around the world and has a distinguished line of judges. They won several awards, including a gold medal for their sweet wine, Brianna. However, they had dreams of expanding their craft and began a search for property to open their winery. Since both are from the Miami County area, their search brought them to a late 1800s farmhouse on 20 acres on Horatio-Harris Creek.

The location was perfect, centralized from other area wineries that will put them on a path of several wine trails not only in Ohio but also in Indiana. And, in a moment of irony, or perhaps showcasing a small world, Shaun discovered after the purchase of the property he had an already established family history there. An aunt grew up there, and a distant cousin was the previous owner.

Currently, the couple is in the process of building a facility that overlooks the property complete with a wide porch for relaxing while enjoying a wine or cider. Another area of seating will be created on the east side of the building with umbrella tables. The almost 2,000 square foot interior space will offer a variety of tasting options for guests and will also be the location for production. The latter a more arduous process then one would imagine that includes multiple licensures and even working with the EPA as byproducts or unconsumed wine must be disposed of in a holding tank given their location in the countryside with a septic system.

Sulfites can kill the bacteria in the system.

The roof had been completed before the rains only days previous, and the siding was completed as the first snow of the year, fortunately only a dusting in the region, began to fall.

In front of the new building, there stands a vineyard that was planted over the summer. The vines will mean the eventual production of dry, sweet, and semi-sweet wines, as well as their focus on hard ciders.

“A big part of what we are planning on doing is focusing on the hard cider side of the business,” said Shaun, explaining how cider is considered wine and that, “No one really does it around here.”

The couple has a lot of plans, from an offering of food trucks to a stage with live entertainment. Danielle pointed across the property to the remaining rock wall of a former barn, debating its potential on down the road.

“That’s the next project,” she said, but for now, as the lone crew for the business and both with fulltime jobs, they are focused on sustainability and taking things slow, just like a fine wine.

More information is available on the Twenty One Barrels Cidery and Winery Facebook page @21barreslwine and www.21barrels.com. 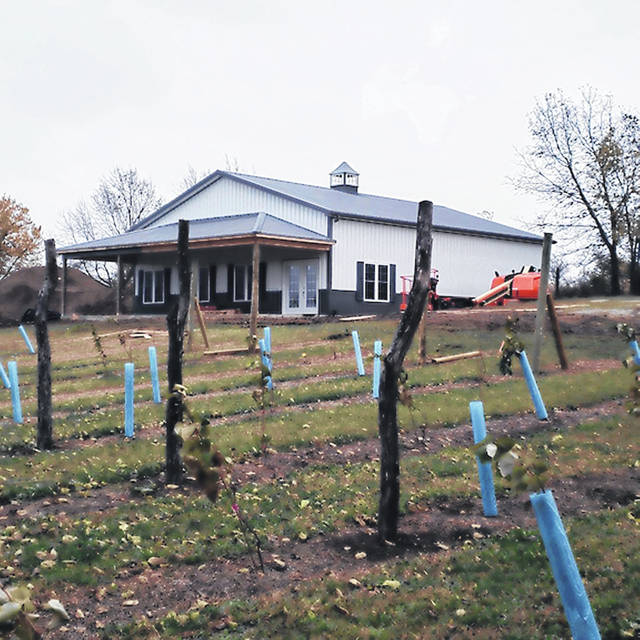