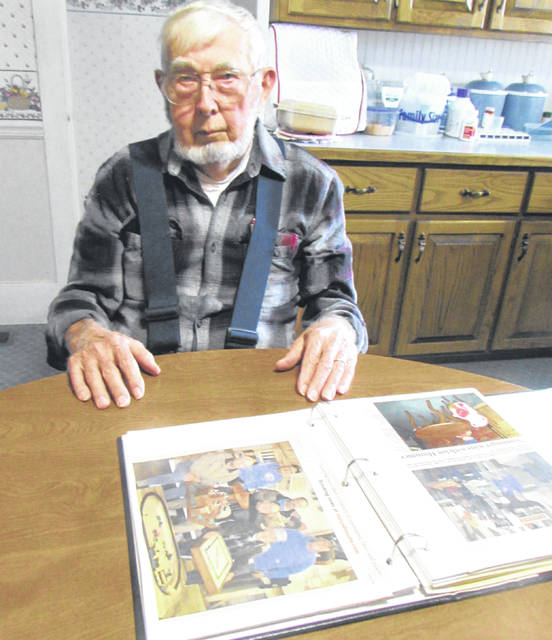 GREENVILLE — Harold Alley, who turned 90 on May 18 this year, has done a little bit of everything in his life. He was a machinist, an award-winning woodworker and is now chief cook and bottle washer at home.

The latter is because his wife, the former June Fields, to whom he was married 71 years ago on July 10, is having health issues.

“My wife was in a nursing home for a while and I’ve been her caregiver ever since,” he said.

The couple met as neighbors.

They are the parents of two children Tim, who lives in Celina, and Melanie, who died at five days of age due to prematurity. They also have two grandchildren and two great-granddchildren.

“We were married almost 12 years before Tim was born,” he said.

Alley has opted not to drive anymore, so he depends on others to take him where he needs to go.

He wanted to attend the recent reunion of the Washington Elementary School but was unable to. He attended school there through fifth grade in 1940.

“There were 10 girls and four boys in our class,” Alley said. “Wavelene Denniston and Rosabelle Thomas were in my class.”

He went on, “The one-room McCabe School, the original school, was named after Ira McCabe on Bickel Road. He is a grandfather to my sister’s mother-in-law. I have his wedding ring. It was found in a bag of his school medals.”

Alley said he misses going to the school’s reunions

He worked almost 30 years in Gettysburg at the Petersime building. After that placed close, he worked in Piqua for another company.

“I worked there the last 11 years and retired 25 years ago the first of June,” he said.

He had also worked at the old creamery on Gray Avenue in Greenville for almost a couple of years. He farmed for four years for Virgil Deeter in the mid-1950s, and worked at a furniture factory in Union City and at New idea in Coldwater from 1947-51.

The son of the late Stuart and Annetta (Cupp) Alley, he was the youngest of eight children and the only one living.

“I was raised in Sharpeye, which used to be a moving little burg with a grocery, barbershop, two garages and a blacksmith shop,” he recalled.

Alley said he doesn’t want to miss another upcoming event, the Wooden Toy Contest at the Ansonia Lumber Co. on Dec. 14. If he gets to go, he knows what he plans on taking.

The toys that are entered in the contest are then given to Operation Christmas Cheer to go to needy children.

“This is one of the highlights of my year,” he said. “I would want to be a part of it even if they didn’t have any prizes. I only missed that contest the first year it started 26 years ago at Flaig Lumber in New Madison.”

Alley, who said he has one at least one top prize and other placings in the competitions, said he works from a shop he “rigged up” in his barn.

“I made a lot of cabinets and I’m not a cabinet maker,” he said. “I make a little bit of everything. It didn’t seem like anybody made a toy for a girl, then I got to making doll cradles and my wife made Raggedy Ann dolls. One year I made a dollhouse and a couple of sleds.”

Where did he get his woodworking talents?

“I suspect I inherited it from a couple of my uncles, and a cousin of mine did all kinds of woodworking with a specialty in cane,” he said. “I use a lot of hardwood. I’ve even built a hog feeder.”

He has scrapbooks full of writings on the toy contest that he enjoys looking at.

“I get ideas from Sweet Annie’s Cabin,” he said.