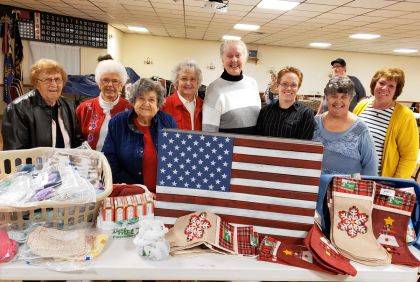 “Even though our November meeting was cancelled, we were still able to collect quite a lot of supplies for the Blue Star Mothers’ Holiday Hugs project. It is such a wonderful program, we were happy to help,” said Betty Hill, DCRWC president.

Due to the early snow storm, the club’s November meeting was cancelled. However, members brought their donations to the Quarter Auction held to benefit the Darke County Veterans Washington D.C. Trip.

DCRWC members not only donated supplies, but several members traveled to Eaton to help at the packing party where the Christmas gift boxes were assembled and made ready for mailing.

DCRWC is a political group founded to provide political education and legislative information; provide a wider knowledge of the principles of the Republican Party; increase the number of registered Republicans; recruit, promote, and support qualified Republican women for political office; give exposure to and work actively for all Republican candidates; and lend support to the activities of other Republican organizations. The DCRWC is a multi-generational, multi-cultural organization providing the structure and support for political activists to learn, engage, and flourish. The Club is chartered by the National Federation of Republican Women and is a member of the Ohio Federation of Republican Women. For more information, visit: http://www.darkegop.org/womens-club.html or email President Betty Hill at: [email protected]