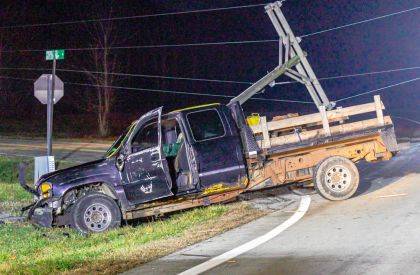 NEW MADISON – A driver was able to avoid serious injury Tuesday evening after the vehicle he was driving left the roadway and struck a utility pole.

At approximately 7:45 p.m., Darke County Deputies along with New Madison Fire and Tri-Village Rescue were dispatched to the intersection of State Route 121 and Preble County Butler Township Road in reference to a vehicle into a utility pole with power lines down.

According to the Darke County Sheriff’s Department, a preliminary investigation into the incident revealed a black 2001 GMC truck driven by Brickton Ginger, 44, of Greenville was traveling northbound on Preble County Butler Township Road approaching the intersection of State Route 121. Ginger advised he was reaching for an item inside the cab of the truck when he realized the stop sign was there. Ginger locked up the brakes causing him to travel off the right side of the roadway striking a utility pole. Ginger remained inside the vehicle until DP&L and New Madison Fire removed the downed power lines from the vehicle.

Ginger was treated on the scene by Tri-Village Rescue for minor injuries prior to being transported to Wayne HealthCare where he was treated and released. He was cited for failure to maintain reasonable control of his motor vehicle.