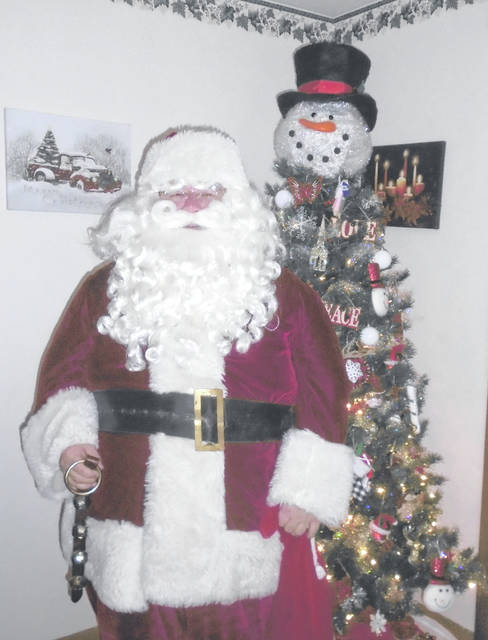 GREENVILLE — Word has it that Santa Claus has been seen around Darke County already, and, because he is so busy this time of year, people are assisting him as helpers throughout the holiday season.

One family has had three generations helping out Santa and is hoping to get a fourth one involved in the future.

Jeff Wappelhorst of Greenville is one of those Santa’s helpers, and has already started taking on North Pole assignments.

He’s been doing it since his father, Tom, died in 1997. Before that, Tom’s father, Bernard “Ben” Wappelhorst had the honor.

“Jeff’s father started helping Santa out professionally when Jamesway Department Store was in town,” said Tom’s widow, Linda, who worked at the store at the time. “He went to a fancy suit (Santa) and they hired him,”

“Dad’s customers wanted me as their Santa,” Jeff said. “The longest running job has probably been the North Star Community Center/American Legion. Dad did it 30 years by himself and now there has been more than 50 years of Wappelhorsts in that chair.”

Jeff has already appeared at some family Christmas parties and is ready to continue this family tradition at more functions.

“I go to a Versailles family’s Christmas since Dad passed,” he said. “After the police chief, Larry Hoffman, died in Ansonia, who was the Rossburg Fire Department’s Santa, it opened up that opportunity for me.”

Linda said her husband was the Broadway Santa for several years in Greenville and would go into different stores.

“He didn’t like sitting in the Santa House, because it was too hot in there,” she said.

Jeff said he did get son Joey, who is 24, in a suit once and he served as a Santa’s helper at the nursing home in Versailles.

“He has a job now and that takes up a lot of Joey’s time,” Jeff said.

Last Friday night, Santa Jeff was asked to come to a family celebration in Rossburg, which he has been doing for the past 15 years.

He will be Santa’s helper on Dec. 7 at the Greenville VFWat 9 a.m for a Breakfast With Santa; at the Bradford Railroad Museum Polar Express from 10 a.m. to 1 p.m. Dec. 14; and a couple of jobs on Dec. 15 in Versailles. And, Christmas Eve, he will work for private individuals in a couple of other areas.

Jeff is on his third Santa suit.

Linda said she had $600 in the fabric and belt.

Now, the belt and boots are the only things that survived Tom’s original costume.

Why does Linda think the three generations have done this?

“They have the personality for it,” she said.

What is Jeff’s secret to carrying out the mission of St. Nick?

“You have to love kids,” he said. “I try and be friendly with them. I have had kids who are genuinely afraid. I don’t make them come up to me. I tell their parents to come to me.”

He also said he never promises a child a gift. He says “I will see what we can do.”

He also carries around a candy bag, just as his father did.

“I have it full of candy canes, Smarties Jolly Ranchers and peppermints,” he said. “”I went to the Covered Wagon, an Amish shop in Union and get all kinds of baked good and candies. It’s close to where I work.”

He works for Continental Testing.

“I travel now throughout the U.S., calibrating aircraft mechanic tools,” he explained. “We visit a few major airports, driving a big Chevy quad cab truck pulling a 20-foot trailer. Usually three or four of go at one time to work out of the trailer.”

After graduating in 1988 from Greenville High School, he said he soon started a family, marrying the former Shari Best, whom he met while she was covering an event at the school for the local newspaper.

“Nine years after graduating High school, I went to college at ITT Tech from 1997-99 and studied electronic engineering,” he said. “The first quarter, Dad passed away and I was going to quit, but Mom wouldn’t let me. I graduated with a 3.7 grade point average with honors.”

In addition to son Joey, he and Shari have a daughter, Mariah North, as well as grandpuppies.

In his spare time, Jeff likes studying theology and said he was getting ready to finish his last class.

“I’m not studying to be a pastor; its’s for my own knowledge,” said Jeff, who attends Bible Fellowship Church in Greenville. “I want to learn more about God.”

Jeff, who has a new beard this year that is different from all of the others, remembers when he and another Santa’s helper showed up at the same venue, but it all worked out.

Even though he’s busy, he still finds time to celebrate Christmas with his family on both he and Shari’s sides

“We make it work,” said Shari, to whom he has been married for 29 years.