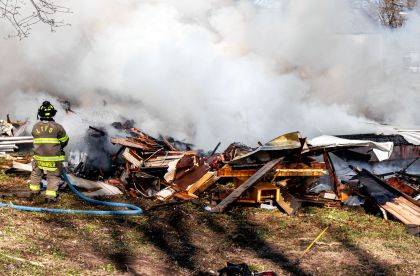 PALESTINE – Firefighters battled a house trailer fire Saturday afternoon after ruble from the previously torn down structure ignited while in the process of being razed.

At approximately 1:02 p.m., firefighters from the Liberty Township Fire department responded to the 100 block of South Main St., Palestine in reference to the remains of a house trailer on fire.

According to Doug Wright, assistant Fire Chief of the Liberty Township Fire Department, the fire is believed to have started in the rear of the southern portion of the structure while personnel were working on the demolished trailer. Although crews worked quickly and tirelessly to bring the blaze under control and prevent it from spreading to nearby structures, one neighboring residence did suffer minor heat and smoke damage due to the fire.

Assistant Chief Wright added that the fire was accidental in nature and that no injuries were reported as a result of the incident. The fire will remain under investigation by the Liberty Fire Department.