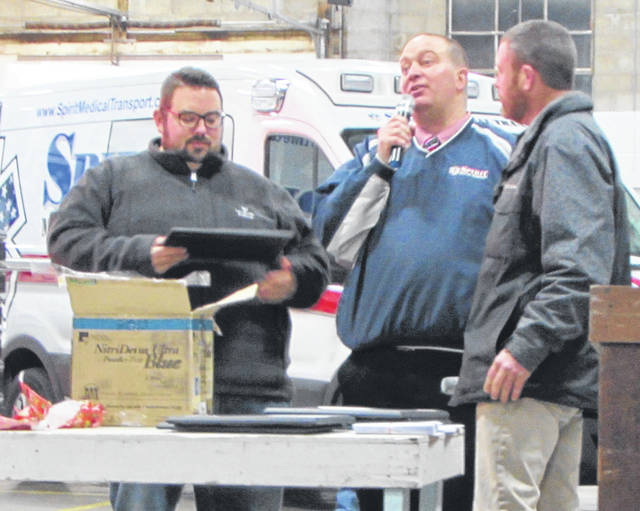 GREENVILLE — Those who think last year’s Spirit Medical Transport’s annual Christmas party was spectacular should have been there Saturday night for this year’s event.

Spirit owners Brian K. Hathaway, president, and Aaron Guthrie, vice president, unveiled six new emergency vehicles last year when they gifted their employees. This year, they went above and beyond to make this a memorable Christmas for their employees, unveiling a total of 10 new vehicles, not to mention gifts for each department, which included three new power cots and other medical equipment as well many pieces of electronics.

The crowd, which was gathering in the Youth Building, was asked to go upstairs to the Coliseum just like they did last year.

Those entering saw a red “ambulance sleigh” being pulled by a set of reindeer that read “Santa’s Workshop.”

“To ensure they couldn’t see anything behind the sleigh, large tarps strung across the entire building prevented anyone from getting any viewing advantages,” Hathaway said.

He shared with everyone that 2019 had been one of the best financial years since the businesses’ inception in 2007 and “tonight we are going to celebrate that occasion in a big way,” he explained. “Our employees are the foundation of the business. You’ve been busy little elves all year, so now it’s time we give back to all of you in recognition of a job well-done.”

The president started out the presentation by recognizing the dispatch center for being diligent in their efforts of taking calls from facilities and hospitals that allowed the company to deliver high-quality and compassionate care day in and day out. He then went on to recognize the company’s quality assurance and billing department for their tremendous focus on billing and collections in 2019 that led to an 18-percent increase in collections in 2019 versus 2018.

“It’s the great people in the office setting that have helped turn the key to the success this past year,” Hathaway said. “While there have certainly been hurdles along the way, this team always rises to the occasion and remains focused on meeting or exceeding goals, without ever challenging our purpose, vision, and values.”

During his address, Hathaway invited various employee groups to the front to participate in unwrapping various presents that had been tucked away in Santa’s sleigh. As he would call off the different groups, Santa and Mrs. Claus would put gifts out on the table for all to open.

Hathaway then called the EMTs to open several packages; one of which included seven new computers to compliment the ambulances. They then opened a package that sent Santa on a quick run to the North Pole. Upon his return, out came his elves with three new Ferno power cots that have the capability of lifting patients weighing up to 700 pounds.

After the drivers of the wheelchair vans were called to the front, they got word that in order to see what Santa had delivered for them, they would have to get Santa and his reindeer to “pull his sleigh, out of the way.” With a chant of “move that sleigh, move that sleigh,” the sleigh moved, and the large tarps dropped.

That was when four brand new wheelchair vans marked with Christmas bells and a bow were unveiled.

The presentations still were not over. Hathaway had the company’s various EMS instructors, who subsequently unwrapped a box containing a ream of paper and then out rolled a new copy machine/scanner for the new education center the company just opened in Greenville. The company’s HR department also opened a new printer/copier for their office.

Still remaining were two gifts to be opened. As one EMT opened the gift, they were directed to put on a pair of sunglasses to “look cool” and “push the button” to see what was behind the garage door. As the door rose up, so did the crowd when in pulled three new Medix brand Ford Transit ambulances.

“As the last package was opened, it contained a miniature size box style ambulance,” said Hathaway, who told the crew the only way that miniature-size ambulance could get bigger, is if they put on the magic sunglasses and again hit the magic button. As the garage door again rose, in pulled three Front Line Ford F350 box-style ambulances.

Hathaway said only five company employees, two of which are his parents, knew about the big surprise. Hathaway said he and the other five spent countless hours stocking each of the six ambulances and four wheelchair vans to make sure they were ready for inspection by the Ohio Division of EMS, days before the company Christmas party.

By the end of the week, all ten new vehicles will be on the roads of western Ohio and eastern Indiana serving those in the geographical area Spirit covers.

More on the party will appear in the Early Bird this coming weekend. 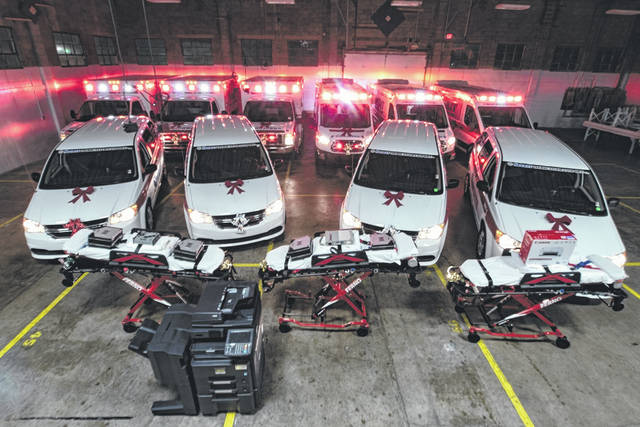