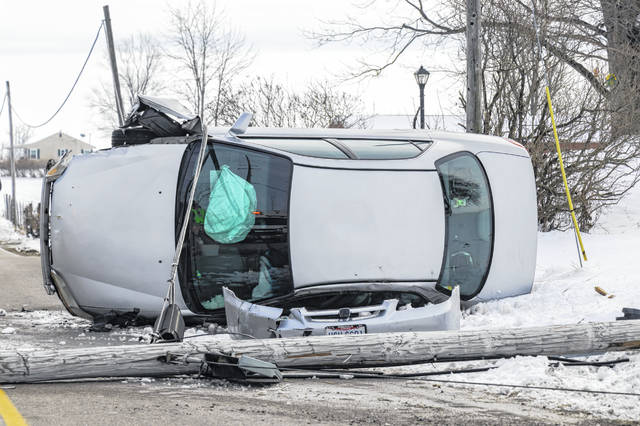 GREENVILLE – Minor injuries were reported after a rollover crash left a utility pole and lines down across the roadway on the outskirts of Greenville.

According to the Greenville Police Department, a preliminary investigation into the incident has revealed that a white Chevrolet Equinox was traveling northbound on Sebring-Warner Road when the driver attempted a left-hand turn onto Katzenberger Road, failing to notice and pulling into the pathway of oncoming traffic.

A silver Honda Accord, traveling southbound on Sebring-Warner Road collided with the Chevrolet, causing the Honda to travel off the right side of the roadway striking a utility pole and roll coming to rest on its side.

The female driver of the Chevrolet, as well as her male front seat passenger, were uninjured in the crash. The male driver of the Honda was examined on the scene by Greenville Township Rescue for minor injuries before refusing any further treatment or transport to a medical facility.