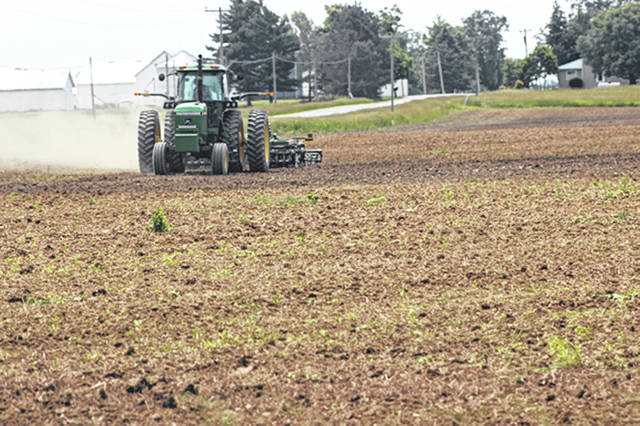 DARKE COUNTY — The OSU Extension Services Office is currently seeking data from area corn and soybean farmers after a deluge of rain resulted in a late planting season.

The plan is to “see what affect those late planting dates had on yields for corn and soybeans,” said Sam Custer, OSU Extension Educator for Agriculture and Natural Resources. “The more data points, the more accurate information we will have.”

Overall for Darke County, one of the largest corn and soybean producers in the state, only 10 percent of crops were planted by the first week of June when the standard planting dates for the state ranges from mid-April to the end of May.

The National Agricultural Statistics Service (NASS) reported 22 percent of corn and 11 percent soybeans planted in the state by May 26. A low turnout compared to 80 and 65 percent, respectively, in the same timeframe in 2018.

In an email from the extension office, it notes the temptation to write off the year as a fluke. However, given Mother Nature’s involuntary trial on area farmers, the ramifications of late planting dates could help future management decisions. The survey sent to farmers includes questions such as planting and harvesting dates, maturity rates, yield, and moisture. It is based on a survey conducted by Dr. Emerson Nafziger in Illinois.

The plan is to combine the results from Illinois with those from Ohio and Indiana.

Elizabeth Hawkins, an OSU field specialist and assistant professor, is leading the Ohio survey, says Custer, with an approximate 485 yield surveys collected across the state, 38 from Darke County, at the time of the interview.

While the local survey numbers may seem low, Custer says Darke County is one of the top responding counties.

Further, “it is quite an ask,” continued Custer as this time of year, farmers are already overwhelmed with taxes. Those who can are encouraged to complete the survey to provide information to help agriculture.

“If we can collect this data and aggregate it, we’ll be much better prepared to give recommendations, should we have another 2019,” said Custer.

The data will be collected from now until Dec. 31 and will be published with an estimated release date of mid to end of January 2020.