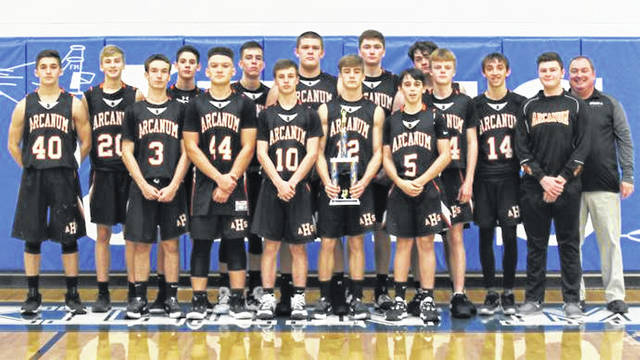 “We played together as a team really well,” said Arcanum JV coach Dave Baker. “The press worked well, we shot as well as we needed to. Overall I was very pleased.”

The Trojans bolted out to a 12-2 lead after one period of play led by Jaxson Christ’s 4-points, a 3-pointer each from Ashton Etherington and Garrett Garno and a Nick Sharritts 2-point basket.

Arcanum pushed its lead to 27-11 after two quarters of play sending the teams to the break outscoring the Blue Devils 15-9 in the second led by Etherington’s 6-points coming by way of two treys and Garno’s 5-points.

“Ashton Etherington shot really well from the outside especially in the first half,” said Baker, “but overall a really good team effort.”

Brookville battled back to take the third quarter of play by a 17-8 score sending the team’s to the final period with the Trojans owning a 35-28 advantage.

Arcanum stepped up fourth quarter play by outscoring Brookville 14-11 to earn a double digit win and claim the championship trophy.

“The big guys scored inside and the guards controlled the ball very well,” Baker stated. “The scoring was pretty well distributed over most of the kids that played a lot of minutes and that is what we are shooting for. Overall we played a great team game.”

“Coach McEldowney has this program on the right track,” added Baker. “We are headed in the right direction.”