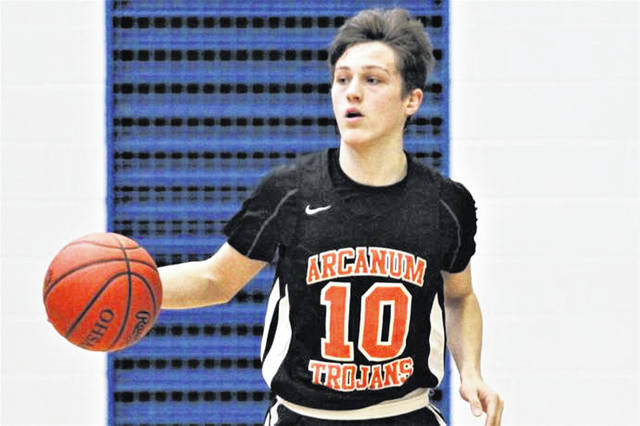 “We came in just trying to get better – that’s kind of been our focus right now,” said Arcanum coach Roger McEldowney. “We want to keep doing things the right way, keep improving and keep improving our execution. We did that at times but we still have a long ways to go in that area.”

The Hawks took the opening period 9-8 before the Trojans with several players under the weather would battle back to take the second quarter 12-7 sending the teams to the break with Arcanum holding a 20-16 advantage.

“Carter (Gray) was just struggling to go up and down the court,” said McEldowney. “He gutted it out. We tried to take him out a couple of times and he said, ‘no coach, I’m going to go.’ He has waited with his injury so long he doesn’t want to come out. He wants to help this team win and we appreciate that.”

The final period went to Arcanum by a point; 8-7 to give the Trojans a 1-point non-conference tournament win.

“A lot of guys played pretty well,” McEldowney stated. “Grant Delk did a really nice job going after rebounds and played hard. Jake (Goubeaux) was able to get the ball to the basket a little bit, just kind of controls the whole game for us. He handles the ball and scores.”

“Proud of the team but we have to continue to get better,” concluded McEldowney. “I thought defensively we were ok most of the time. A win is a win but we’re going to continue to back to the drawing board and get better at what we do.”

Blake Scholl led the Blackhawks and a scores with a game high 13-points.