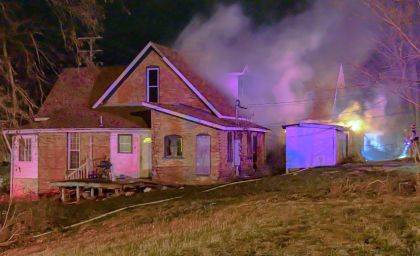 GREENVILLE- A two-alarm fire left three families temporarily displaced Tuesday morning after fire broke out in the rear portion of the multi-family dwelling. At approximately 2:31 a.m., emergency personnel from the Greenville City Fire Department responded along with mutual aid from Greenville Township Fire and Rescue, New Madison and Versailles Fire Departments to a reported structure fire in the area of Chestnut Street and Bickel Hill.

According to Greenville City Fire Chief Russ Thompson, crews arrived on the scene to find heavy smoke coming from the rear of a multi-family dwelling located at 503 Chestnut Street and quickly called for a second alarm. Crews were able to contain the blaze to an outbuilding connected to the main structure preventing it from spreading any further throughout the three apartments.

All three units of the triplex were occupied at the time the fire began; however, it is still unclear how the families were alerted to the fire. “There were no audible alarms sounding in the rear unit indicating any evidence of working smoke detectors in the area of the fire,” stated Chief Thompson. “Due to some confusion, the initial belief was that there may have been an entrapment involved,” he continued. After a search of the units was conducted and some additional clarification it was discovered that all occupants were able to safely evacuate. Chief Thompson also added there were no reported injuries as a result of the incident and that it was believed the families’ pets that prompted the initial reports of entrapment were also able to be safely removed. Red Cross was requested to the scene to assist in the relocation of the families displaced by the fire.

The cause and nature of the fire are unknown at this time and will remain under investigation by the Greenville City Fire Department.